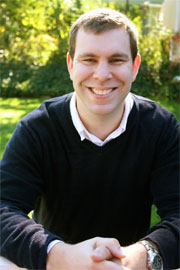 Dave White is a Derringer Award-winning mystery author and educator. White, an eighth grade teacher for the Clifton, NJ Public School district, attended Rutgers University and received his MAT from Montclair State University. His 2002 short story "Closure," won the Derringer Award for Best Short Mystery Story the following year. Publishers Weekly gave the first two novels in his Jackson Donne series, When One Man Dies and The Evil That Men Do, starred reviews, calling When One Man Dies an "engrossing, evocative debut novel" and writing that his second novel "fulfills the promise of his debut." He received praise from crime fiction luminaries such as bestselling, Edgar Award-winning Laura Lippman and the legendary James Crumley.

Both When One Man Dies and The Evil That Men Do were nominated for the prestigious Shamus Award, and When One Man Dies was nominated for the Strand Critics Award for "Best First Novel". His standalone thriller, Witness To Death, was an ebook bestseller upon release and named one of the Best Books of the Year by the Milwaukee Journal-Sentinel. All three books have been reissued by Polis Books and are available wherever ebooks are sold.

The third book in his acclaimed Jackson Donne series, Not Even Past: a Jackson Donne novel, was published in February 2015 by Polis Books.

On Not Even Past:

"White is one of a group of younger writers reimagining the P.I. novel by giving Donne solid connections to his culture (he's not alienated from his world) and a moral self-awareness I think is more interesting than the traditional P.I. code of behavior. This book flies."
—Carole Barrowman, The Milwaukee Journal-Sentinel

On The Even That Men Do:

"Intricate plotting and nonstop action make this a nail-biting read from start to finish. White, winner of the Derringer Award for When One Man Dies, is a writer to watch."
—Library Journal

"Stunning...fulfills the promise of his debut...the author does such a fine job of depicting the inner conflicts of his fallible but ultimately heroic protagonist." —Publishers Weekly

On When One Man Dies:

"Derringer Award-winner White's engrossing, evocative debut novel will grab most readers from its opening sentences: ‘I've killed three men in my life. One the police know about, two that I've kept to myself."
—Publishers Weekly, ***Starred Review***