Feminist writer with an award-winning memoir. 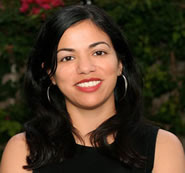 Daisy Hernández is the coeditor of Colonize This! Young Women of Color on Today’s Feminism and former executive editor of ColorLines magazine. She speaks at colleges and conferences about feminism, race, and media justice, and her writing has appeared in the New York Times, NPR’s All Things Considered, and Ms. Magazine.

She is the Kenan Visiting Writer at the University of North Carolina-Chapel Hill.

In her lyrical coming-of-age memoir, Daisy Hernández, the daughter of a Colombian mother and Cuban father, chronicles what the women in her community taught her about race, sex, money, and love. On the outskirts of New York City, Daisy starts out in English-as-a-second-language classes and ends up writing for the New York Times. In between, she struggles to understand her family’s practice of Santería, comes out as bisexual and negotiates the expectations that she become white—like the Italians. A touching and heartfelt exploration of family and identity, A Cup of Water Under My Bed is about sexuality, immigration, race, and class, but it is ultimately a daughter’s story of finding herself and creating a new, queer life.

On A Cup of Water Under My Bed:

"Warm and thoughtful, Hernández writes with clear-eyed compassion about living, and redefining success, at the intersection of social, ethnic and racial difference. Personal storytelling at its most authentic and heartfelt."
—Kirkus Reviews

"Journalist, feminist, and first-time memoirist Hernández presents a coming-of-age story that dives into the complexities of language, sexuality, and class…She maintains a lively pace by flashing back-and-forth between childhood and adulthood, personal and professional lives, with an emphasis on her ascent from New York Times intern to regular columnist at Ms. An accessible, honest look at the often heart-wrenching effects of intergenerational tension on family ties." —Booklist