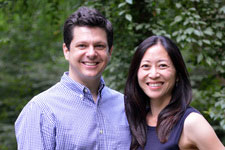 Husband-and-wife team Anna Kang and Christopher Weyant are the creators of You Are (Not) Small, which won the Theodor Seuss Geisel Award and was named a Notable Children’s Book by the American Library Association.

Anna, a native New Yorker, received an M.F.A. from USC’s School of Cinematic Arts where the visual storyteller in her was awakened, forever changing the way she saw art, life, and everything in between. Besides writing, Anna loves to read, travel, laugh, eat, and nap.

Christopher is a cartoonist and illustrator. His work can regularly be seen in The New Yorker magazine. His cartoons are syndicated worldwide and have been featured on The Today Show, Meet the Press, and World News Tonight.

They live in New Jersey with their two daughters, Kate and Lily, a guinea pig named Athena, and a hermit crab named Olaf.

I don't go to a particular place. I'm inspired by my kids and their friends and hearing how they talk and think.

That there are so many thoughtful people out there who care deeply about children's books with different viewpoints and are able to express these opinions in an articulate and respectful manner.

My husband and my kids. Because they are genuinely funny, happy people.

The follow up to Can I Tell You A Secret?

"Fuzzy, bearlike creatures of different sizes relate to one another in an amusing story that explores the relative nature of size...While the story itself seems simple, the concepts are pertinent to several important social issues such as bullying and racism, as well as understanding point of view.Charming characters, a clever plot and a quiet message tucked inside a humorous tale."
—Kirkus Reviews

"In this endearing story, two bears argue about perspective. Each is convinced that the other is big or small in comparison to him and his friends ("I am not small. You are big."; "I am not big. See?")...The illustrations complement the text nicely; the characters are expressive and likeable. The use of white space and large text make this a perfect book for reading aloud or for a shared lap read."
—School Library Journal

"Told entirely through (increasingly irate) dialogue, Kang and Weyant’s follow-up to You Are (Not) Small, brings back the purple and orange bearlike creatures from that book, who are now fighting over ownership of a chair. “I was sitting in it before,” says the purple one. “I’m sitting in it now,” responds the other. Using distraction (a spinning, zooming swivel chair) and dirty tricks (a tickle-inducing feather), the animals wrest control of the chair from the other, before giving up to play together. Kang’s stripped-down dialogue and Weyant’s exuberant cartoons tap into the core of their characters’ emotions in a story that highlights the foolishness of fighting when there’s fun to be had."
—Publishers Weekly