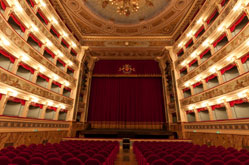 We are celebrating Giuseppe Verdi's and Richard Wagner's 200th birthdays!

Giuseppe Verdi wrote 29 operas which premiered between 1839 and 1893. In addition to his busy compositional life, he was one of the leaders in the Unification of Italy in the nineteenth century. The chorus of Hebrew slaves in Nabucco, Va pensiero, became the anthem of the Italians rising up against the rule by the Austrians. The Verdi top 10 at the Met are Aida, La Traviata, Rigoletto, Il Trovatore, Otello, Un Ballo in Maschera, La Forza del Destino, Don Carlos, Falstaff, Simon Boccanegra.

Richard Wagner is one of the most controversial figures in history, not just musical history. Because of his music's association with the Third Reich, playing his music in major performance is still frowned on in Israel. Despite his virulent anti-semitism (not uncommon in the 19th century), the greatest Wagnerian conductors contain a pantheon of great Jewish conductors including James Levine, Daniel Barenboim, Leonard Bernstein, Georg Solti, Erich Leinsdorf, and others. Wagner has only 7 mature works from 1843-1882 (counting the Ring as 1, not 4 operas).

The Met website is highly recommended for all sorts of information and the archives contain a database that is for all statistic and historic nuts like me. The Met also has (for a fee) streaming services of both audio and video-- Met Opera on Demand.