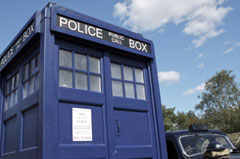 The Day of the Doctor has come and gone and again you find yourself waiting for new episodes of Doctor Who. Here is a list of books to tide you over while you await the new Doctor’s appearance. If you are a new Whovian or a fan from the old classics, check out these books for adults and teens who love the Doctor.

Or maybe you have not discovered the Doctor yet, but you are curious about what your friends are talking about when they argue about the 4th Doctor vs the 10th Doctor and Tom Baker’s scarf vs David Tennant’s tie….we might not be able to school you in all things Doctor, but these books are something you and your friends can both enjoy.

Note: “Doctor Who is a British science-fiction television programme produced by the BBC. The programme depicts the adventures of the Doctor, a Time Lord—a time-travelling humanoid alien. He explores the universe in his TARDIS, a sentient time-travelling space ship. Its exterior appears as a blue British police box, which was a common sight in Britain in 1963 when the series first aired. Along with a succession of companions, the Doctor faces a variety of foes while working to save civilisations, help ordinary people, and right wrongs.” Wikipedia

You can't really have a YA Doctor Who reading list without the Hourglass series, an excellent time travel adventure. Emerson Cole has grown up thinking she sees ghosts, but the truth is she can travel through time and the walls between the here and now are breaking down. She meets and begins to fall in love with Michael, but their love is dangerous. I can't tell you how the Doctor and River's relationship is similar to Michael and Em's because, well, "spoilers sweetie".