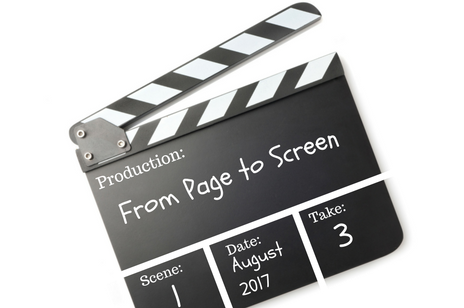 From Page to Screen 3

Cinematic works and the books that inspired them.

Alexander and the Terrible, Horrible, No Good, Very Bad Day

On a day when everything goes wrong for him, Alexander is consoled by the thought that other people have bad days too.

All You Need is Kill (Live Die Repeat: Edge of Tomorrow)

Young warrior Keiji Kiriya is sent out on the battlefield to fight alien invaders, only to find himself in a cycle of dying and being reborn to fight again, until he meets a mysterious girl known as Full Metal Bitch, who may provide a way out. The film Live Die Repeat: Edge of Tomorrow is based on a screenplay adapted from this book.

The story of the five-day interview between Rolling Stone reporter David Lipsky and acclaimed novelist David Foster Wallace, right after the publication of Wallace's groundbreaking epic novel, 'Infinite jest.' The film The End of the Tour is based on this novel.

Before I Go to Sleep

Without her husband's knowledge, Christine, whose memory is damaged by a long-ago accident, is treated by a neurologist who helps her to remember her former self through journal entries until inconsistencies begin to emerge, raising disturbing questions.

The Best of Me

This is the story of two small-town former high school sweethearts from opposite sides of the tracks. Now middle-aged, they have taken wildly divergent paths, but neither has lived the life they imagined, and neither can forget the passionate first love that forever altered their world. When they are both called back to their hometown for the funeral of the mentor who once gave them shelter, they will be forced to confront the choices each has made, and ask whether love can truly rewrite the past.

A gripping, heart-wrenching true story that shocked the nation. May 5, 1993. West Memphis, Arkansas. Three young boys playing in the nearby woods never come home for dinner. In the rush to find and convict the killers, police focus on a trio of teenagers suspected of devil worship. It is only when an investigator reveals that the evidence doesn't all add up that the community is forced to face the reality that the true killer might still be out there.

The Diary of a Teenage Girl

Like most teenage girls, Minnie Goetze is longing for love, acceptance and a sense of purpose in the world. Minnie begins a complex love affair with her mother's boyfriend, the handsomest man in the world, Monroe Rutherford. What follows is a sharp, funny and provocative account of one girl's sexual and artistic awakening, without judgment.

Seventeen-year-old Bianca Piper starts sleeping with Wesley Rush, a notorious womanizer who disgusts her, in order to distract her from her personal problems, and to her surprise, the two of them find they have a lot in common and are able to help each other find more productive ways to deal with their difficulties.

The Fault in Our Stars

Sixteen-year-old Hazel, a stage IV thyroid cancer patient, has accepted her terminal diagnosis until a chance meeting with a boy at cancer support group forces her to reexamine her perspective on love, loss, and life.

Victor Frankenstein discovers the secret of creating life and fashions an eight-foot monster, only to bring danger and destruction to the lives of those he loves.

Given his lifetime assignment at the Ceremony of Twelve, Jonas becomes the receiver of memories shared by only one other in his community and discovers the terrible truth about the society in which he lives.

Hector and the Search for Happiness

By all appearances, Hector has it all. A successful psychiatry practice, a comfortable home, and a beautiful, loving girlfriend. However, he's frustrated that he can't provide his patients with real happiness. So, he decides to travel the world in search of the elusive emotion.

Here Be Monsters! (The Boxtrolls)

Welcome to Ratbridge. But beware—for there is skulduggery afoot. Young Arthur has fallen foul of the appalling outlaw, Snatcher, and is trapped alone in the town with every way home sealed. The film The Boxtrolls is based on this novel.

Hassan is a culinary ingenue with the gastronomic equivalent of perfect pitch. Displaced from their native India, his family settles in a quaint village in the south of France. They plan to open an Indian restaurant, that is, until Madame Mallory, the owner of a classical French restaurant, gets wind of it. Her icy protests against the new Indian restaurant so near her own escalate to all out war; until Hassan's cooking talent and love for Mme. Mallory's assistant, Marguerite, cannot be ignored.

While in a coma following an automobile accident that killed her parents and younger brother, seventeen-year-old Mia, a gifted cellist, weighs whether to live with her grief or join her family in death.

In the Heart of the Sea

The incredible story of the wreck of the whaleship Essex, the inspiration for Melville's great classic, Moby Dick. In 1820, the Essex set sail from Nantucket on a routine voyage for whales. Fifteen months later, in the farthest reaches of the South Pacific, it was rammed and sunk by an eighty-ton bull sperm whale. Its twenty-man crew, fearing cannibals on the islands to the west, made for the 3,000-mile-distant coast of South America in three tiny boats.

A Long Way Down

Four strangers happen to meet on a London rooftop with the intent of committing suicide on New Year's Eve. They decide to call off their plans for six weeks and form an unconventional, dysfunctional family and friendship.

An unlikely World War II platoon has been tasked by FDR with going into Germany to rescue artistic masterpieces from Nazi thieves and returning them to their rightful owners. With the art trapped behind enemy lines, and with the German army under orders to destroy everything as the Reich fell, how could they possibly succeed? But as the Monuments Men, as they were called, found themselves in a race against time, they would risk their lives to protect mankind's greatest achievements.

The Switch (Life of Crime)

Ordell Robbie and Louis Gara meet while doing time for grand theft auto. Now that they're out, they join forces for one big score. They plan to kidnap the wife of a wealthy Detroit developer and hold her for ransom. But they don't count on her lowlife husband not wanting his lady back. So it's on to Plan B--with the unlikely help of a ticked-off housewife. The film Life of Crime is based on this novel.

The Theory of Everything

Renowned astrophysicist Stephen Hawking falls deeply in love with fellow Cambridge student Jane Wilde. Once a healthy, active young man, Hawking received an earth-shattering diagnosis at 21 years of age. With Jane fighting tirelessly by his side, Stephen embarks on his most ambitious scientific work, studying the very thing he now has precious little of -- time. Together, they defy impossible odds, breaking new ground in medicine and science.

Set in the lower echelons of 1860s Paris, Therese Raquin, a sexually repressed, beautiful young woman, is trapped into a loveless marriage to her sickly cousin Camille by her domineering aunt, Madame Raquin. After she meets her husband's alluring friend Laurent, she embarks on an illicit affair that leads to tragic consequences. The film In Secret, previously titled Therese, was based on this novel.

This is Where I Leave You

When their father passes away, four grown siblings, bruised and banged up by their respective adult lives, are forced to return to their childhood home and live under the same roof together for a week. Confronting their history and the frayed states of their relationships among the people who know and love them best, they ultimately reconnect in hysterical and emotionally affecting ways amid the chaos, humor, heartache and redemption that only families can provide.

Fourteen-year-olds Raphael and Gardo team up with a younger boy, Rat, to figure out the mysteries surrounding a bag Raphael finds during their daily life of sorting through trash in a third-world country's dump.

Born a free man in New York State in 1808, Solomon Northup was kidnapped in Washington, D.C., in 1841. He spent the next 12 years as a slave on a Louisiana cotton plantation, and during this time he was frequently abused and often afraid for his life. This is his detailed description of slave life and plantation society.

Olympian and war hero Louis Zamperini survived in a raft for 47 days after a near-fatal plane crash in WWII, only to be caught by the Japanese Navy and sent to a prisoner-of-war camp.

A single mother who struggles with drug addiction is held hostage in her own apartment by a fugitive who has escaped from prison and murdered the judge who was assigned to his case. The 2015 American crime-drama thriller film Captive is based on this book.

Two years after a horrible incident made them run away, vampire princess Lissa and her guardian-in-training Rose are found and returned to St. Vladimir's Academy, where one focuses on mastering magic, the other on physical training, while both try to avoid the perils of gossip, cliques, gruesome pranks, and sinister plots.

A Walk Among the Tombstones

High-volume dope dealers make an easy mark for kidnappers. After all, what are they going to do, call the cops? But Kenan Khoury, heroin wholesaler to the five boroughs, haggled over the price, and his wife came back in pieces. The only person he can trust to avenge her is Matt Scudder, ex-cop, sober alcoholic, who wields his own brand of guerrilla justice.

A Walk in the Woods

The story of Bill Bryson's walk on the Appalachian trail from Springer Mountain in Georgia to Mount Katahdin in Maine.

Set in a mythic New York City and spanning more than a century, follow a story of miracles, crossed destinies, and the age-old battle between good and evil.