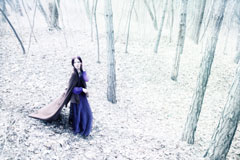 Fairy Tales for a New Age

All little girls and boys grow up with fairy tales. Some know the Disney Princesses and others know the more traditional Brothers Grimm tales. Still others jumped rope to Mother Goose or fell in love with the art work of Paul Zindel or James Marshall. We grow up and graduate to chapter books and longer stories, but few ever forget those tales. These books are fairy tales for older readers. Readers who have outgrown the picture books at bed time, but still love the adventure and magic of fairy tales. The good guys vs. the bad guys...though in these stories it sometimes can be difficult to tell who the bad guys REALLY are. Think back and remember your favorite fairy tale...then check the list and see if we have a new spin on it for you.

We all know the bones of this story. The princess cursed to sleep, the dashing prince on a quest who awakens the princess with a kiss. Whether you're a fan of the slightly creepy Brothers Grimm version or the more romantic Disney tale, try these retellings for teens and adults.

Another sleeping princess tale from the Brothers Grimm, but this princess was poisoned by a jealous step-mother. That is the Snow White many of us know, but there is another story of Snow White and Rose Red told first by Perrault. A story of sisters who befriend a bear and help break the curse that keeps him from becoming the prince he truly is. These two stories are totally different but we've collected retellings of both here.

A young mermaid falls in love with prince from a far. She makes a dangerous bargain to bridge their two worlds for a chance to happily ever after. In the original, the prince gets happily ever after with his love, but the mermaid sacrifices all in a sweet but melancholy ending. Disney gave her red hair and a happy ending. Curious how others have rewritten Hans Christian Andersen's original tale? Check out some of these retellings of Andersen's tale as well as a German tale of a mermaid named Undine by Friedrich Heinrich Karl , Baron de la Motte-Fouque.

A little girl gifted with a red hood from her grandmother goes off to deliver lunch, but pays a high price for disobeying her mother. From the young children's version with a heroic woodsman to very scary or sexy adult versions, this tale has been a favorite through the ages.

Twelve sisters share a room and a secret. Each night they dance until they wear out the soles of their shoes. Many try to solve the mystery and many die while the mystery continues until a wounded veteran is able to use all his skills to save the princesses and claim one as his bride.

A craving for cabbage and an offended witch leads to a girl being raised in an isolated tower with only her long golden braid to allow her adopted mother (or anyone else) in or out. A prince to the rescue, or at least to seduction if you're reading the original, and many trials later there is a happy ending for Rapunzel, her prince, and their twins.

An orphan left in the care of a cruel stepmother finds her prince charming with the help of a fairy godmother. Almost every culture has a similar story of a poor, but kind girl rescued from a hard life by a romantic hero. We all know the tale and there have been countless retellings of a poor girl or young women who is noticed by a rich, handsome hero and swept off her feet into a happily ever after.  Here are just a few of the more interesting retellings of Cinderella's story.

A strange little man helps the miller's daughter spin straw into gold for the king, on the condition that she will give him her first-born child.

Beauty and the Beast

An arrogant prince cursed to have his outside mirror his inner personality is challenged to win the love of a maiden before a magic rose fades or else he will remain a monster forever. But who could love a beast...find out in these funny and romantic retellings.

We've listed just a few of the many folk tales and fairy tales that have been passed down through different cultures. The following are no less magical or worthy, but we did find fewer retellings of these stories. So if you are looking for something a bit more creative and off the beaten path check out:

Anthologies & Tales Retold Involving Elements of More than One Tale