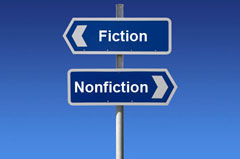 As if writing great literature isn't challenging enough, these writers have chosen to write both fiction and nonfiction and have succeeded at both. Talent, creativity, imagination, and opinions - these writers have it all and can convey it in either genre. Check out some of each at your local library!

With story and characters drawn from Louisa May Alcott's Little Women, Geraldine Brooks won the 2006 Pulitzer Prize for Fiction for her novel March. Publishers Weekly say of it, "Brooks's affecting, beautifully written novel drives home the intimate horrors and ironies of the Civil War and the difficulty of living honestly with the knowledge of human suffering." Her nonfiction includes Foreign Correspondence: A pen pal's journey from down under to all over, a book she assembled based on her childhood pen pals from around the world and her search as an adult to find out their fates and which Kirkus Reviews calls "...An evocative, superbly written tale of a woman's journey to self-understanding."

Critically acclaimed for such novels as The Prince of Tides and The Great Santini, Conroy is also known for great nonfiction. Booklist dares you to "try to resist rereading...My Reading Life!" In his newest memoir, The Death of Santini, the Washington Post says, "Conroy has fashioned a memoir that is vital, large-hearted and often raucously funny." A brilliant writer no matter the genre.

Booklist calls Joan Didion "a master essayist, great American novelist, and astute political observer." Hugely successful for her heart-rending memoirs, Blue Nights and The Year of Magical Thinking, which won the National Book Award for nonfiction, but equally respected for such novels as Play It As It Lays, A Book of Common Prayer, and Democracy, Joan Didion has raised the bar for writers of fiction and literary journalism.

With two novels and lots of nonfiction to her credit, Annie Dillard is an American treasure. Her 1975 Pulitzer Prize winning, Pilgrim at Tinker Creek, has been on numerous Top 100 lists (i.e. Random House's survey of the century's 100 best nonfiction books) and has even had a symphony composed by Sir Michael Tippett based on it. Her novel, The Living, received a starred review from Booklist : "Her first novel is a spiraling, detail-rich saga of life in the Pacific Northwest during the second half of the nineteenth century...A consuming and memorable experience." Of her second novel, The Maytrees, Publishers Weekly says, "In short, simple sentences, Dillard calls on her erudition as a naturalist and her grace as poet to create an enthralling story of marriage-particular and universal, larky and monumental."

He may be a 'wild and crazy guy' but Steve Martin is also an accomplished writer in multiple genres. His novella, Shopgirl, was turned into a film in which he starred with Claire Danes. His memoir, Born Standing Up, made Time magazine's Top Ten Nonfiction Books in 2007. In 2010, his novel, An Object of Beauty, based on Martin's extensive knowledge of the art world, was published. He's even written a children's alphabet book, The Alphabet from A to Y with Bonus Letter, Z! He's got Grammys, he's got an Emmy, he's even got an Academy Honorary Award and his books are loaded with both wit and profundity.

Toni Morrison has earned the American Book Award and Pulitzer Prize for Fiction for her novel Beloved, the Nobel Prize for Literature, and the Presidential Medal of Freedom. Her nonfiction includes such titles as Remember: the journey to school integration written for children and What Moves at the Margin about which Booklist says of her…"A master stylist, penetrating thinker, and committed artist wholly engaged in transforming lives, Morrison believes that a novel should be beautiful, and powerful, but it should also work. It should have something in it that enlightens. Morrison holds to the same high standards in her revelatory nonfiction." Take a look at her fiction, nonfiction, and children's books and you'll see why she is one of America's greatest living writers.

She's gotten awards from Yale, Columbia, and Rutgers, to name a few. She's gotten honorary degrees from Smith, Dartmouth, and Stevens Institute of Technology, to name a few more. And let's not forget her Pulitzer Prize for Commentary in 1992. Anna Quindlen is known for telling it like it is in both her fiction and nonfiction. Three of her novels have been made into films: One True Thing, Black and Blue, and Blessings. Her latest work of fiction is Still Life With Bread Crumbs about which Publishers Weekly says, 'Quindlen has always excelled at capturing telling details in a story, and she does so again in this quiet, powerful novel, showing the charged emotions that teem beneath the surface of daily life...' There's plenty of nonfiction, including her most recent, Lots of Candles, Plenty of Cake and even a couple of children's books to round out Quindlen's impressive body of work.

Anyone who has read the 1980 National Book Award winner, Sophie's Choice, will never forget its heartbreaking story. Anyone who hasn't read it, should. The Confessions of Nat Turner won the Pulitzer Prize in 1968 amid both praise and controversy. In 1990, Darkness Visible: a memoir of madness addressed his depression with more gut-wrenching honesty bringing the illness to light in a way few writers had done before.

Talk about prolific! Take a look at the list of books Paul Theroux has written. From his 1975 classic, The Great Railway Bazaar about which Kirkus says, 'The only regret for the reader is that images, faces, fantasies rush by as fast as the wheels of those furtive trains...Splendid', to his hugely successful novel, The Mosquito Coast, made into a film starring Harrison Ford, Theroux has made a career of thrilling us with his travel writing and enriching us with his fiction - all set in the most exotic of locations.

Did one man really create Rabbit Angstrom, Henry Bech, and The Witches of Eastwick? Quintessentially American writer, John Updike created these and many more besides writing poetry, essays, a play, and a memoir entertaining readers over the course of six decades. He is the recipient of numerous awards including two Pulitzer Prizes for Fiction (Rabbit is Rich and Rabbit at Rest), two National Book Awards, three National Book Critics Circle awards, and both the 1989 National Medal of Arts and 2003 National Humanities Medal. Rabbit, Run was featured in Time's All-TIME 100 Greatest Novels. Kirkus Reviews calls his memoir, Self-Consciousness "a neat masterpiece of literary undressing." Here's a bit of trivia: Only three writers have received two Pulitzers for Fiction: Booth Tarkington, William Faulkner and John Updike who, come to think of it, all wrote fiction and nonfiction.