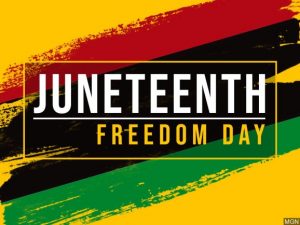 While Abraham Lincoln issued the Emancipation Proclamation on January 1, 1863, very few people were immediately freed. On June 19th Union soldiers, led by Major General Gordon Granger, landed at Galveston, Texas with news that the Civil War had ended and that the enslaved were now free.  A full two and a half years after the Emancipation Proclamation and two long months after Richmond fell, the last enslaved African Americans in Texas were pronounced free people. That momentous date, June 19, 1865, has been proclaimed Juneteenth and celebrated annually ever since. Juneteenth is also known as “Freedom Day”, “Emancipation Day” or "Jubilee Day".  Juneteenth is the oldest nationally celebrated commemoration of the ending of slavery in the United States.
Over time, the celebration of June 19th was coined “Juneteenth” and grew with more participation from descendants of slavery. The Juneteenth celebration was a time community engagement, praying and for gathering remaining family members. Juneteenth continued to be highly revered in Texas decades later, with many former slaves and descendants making an annual pilgrimage back to Galveston on this date.  In 2021, President Biden signed into law Juneteenth National Independence Day Act, S. 475, creating a federal holiday to commemorate Juneteenth.  It is the first federal holiday approved since Martin Luther King Jr. Day in 1983.

Places of Interest To Visit: