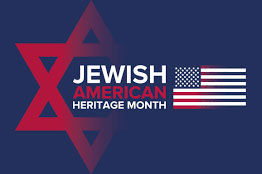 Celebrate Jewish American Heritage Month this May with titles that explore the breadth and depth of the American Jewish community. The majority of books with Jewish characters and content are about the Holocaust: most of what remains relates to holidays or a short list of popular figures. These titles go beyond the 5 F's (foods, festivals, folklore, fashion, and famous people) to connect readers with the day to day experiences of what it means to be Jewish in the US.