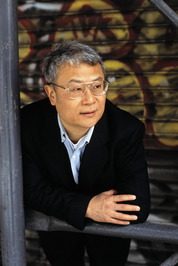 Winner of the 1999 National Book Award for Fiction!

In Waiting, PEN/Hemingway Award-winning author Ha Jin draws on his intimate knowledge of contemporary China to create a novel of unexpected richness and feeling. This is the story of Lin Kong, a man living in two worlds, struggling with the conflicting claims of two utterly different women as he moves through the political minefields of a society designed to regulate his every move and stifle the promptings of his innermost heart.

For more than seventeen years, this devoted and ambitious doctor has been in love with an educated, clever, modern woman, Manna Wu. But back in the traditional world of his home village lives the wife his family chose for him when he was young--a humble and touchingly loyal woman, whom he visits in order to ask, again and again, for a divorce. In a culture in which the ancient ties of tradition and family still hold sway and where adultery discovered by the Party can ruin lives forever, Lin's passionate love is stretched ever more taut by the passing years. Every summer, his compliant wife agrees to a divorce but then backs out. This time, Lin promises, will be different.

Tracing these lives through their summer of decision and beyond, Ha Jin vividly conjures the texture of daily life in a place where the demands of human longing must contend with the weight of centuries of custom. Waiting charms and startles us with its depiction of a China that remains hidden to Western eyes even as it moves us with its piercing vision of the universal complications of love.

Ha Jin left his native China in 1985 to attend Brandeis University. He is the author of two books of poetry; two collections of stories, Ocean of Words, which won the PEN/Hemingway Award in 1997, and Under the Red Flag, which won the Flannery O'Connor Award for Short Fiction in 1996; and In the Pond, a novel. He lives near Atlanta, where he is a professor of English at Emory University.

Ha Jin: In His Own Words

I was born in mainland China, and grew up in a small rural town in Liaoning Province. From the age of fourteen to nineteen I was a volunteer in the People's Liberation Army, staying at the northeastern border between China and the former Soviet Union. I began teaching myself middle and high-school courses in my third year in the army. In my sixth year I decided to leave the army and go to college. But colleges remained closed during the Cultural Revolution, which continued when I was demobilized, so instead I worked as a telegrapher at a railroad company for three years in Jiamusi, a remote frontier city in the Northeast. During this time, I began to follow the English learner's program, hoping someday to read Friedrich Engels' The Condition of the Working Class in England in 1844 in the English original.

In 1977 colleges reopened, and I passed the entrance exams and went to Heilongjiang University in Harbin where I was assigned to study English, even though this was my last choice for a major! I received a B.A. in English in 1981, then studied American literature at Shandong University, where I received an M.A. in 1984. The following year I came to the United States to do graduate work at Brandeis University, from which I earned a Ph.D. in English in 1993. In the meantime, I studied fiction writing at Boston University with the novelists Leslie Epstein and Aharon Appelfeld

After the Tiananmen massacre, I realized it would be impossible to write honestly in China, so decided to immigrate. Unlike most exiled writers already established in their native language, I had no audience in Chinese, and so chose to write in English. To me, this meant much labor, some despair, and also, freedom.

Currently I am an associate professor in English at Emory University. I've published two volumes of poetry, Between Silences (University of Chicago Press, 1990), and Facing Shadows (Hanging Loose Press, 1996), and two books of short fiction, Ocean of Words (Zoland Books, 1996) which received the PEN Hemingway Award, and Under the Red Flag (University of Georgia Press, 1997), which received the Flannery O'Connor Award for Short Fiction and was a finalist for the Kiriyama Pacific Rim Book Award. My novella, In the Pond (Zoland Books, 1998), which was selected as a best fiction book of 1998 by the Chicago Tribune. I've had short stories included in The Best American Short Stories (1997 and 1999), three Pushcart Prize anthologies, and Norton Introduction to Fiction and Norton Introduction to Literature, among other anthologies.