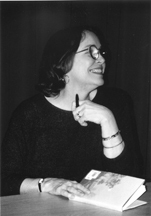 The Tucks have discovered the Fountain of Youth--but is it a blessing or a curse? Ten-year-old Winnie must consider this question even as she is kidnapped, witnesses a murder, and assists in a jailbreak. Along the way, the reader is treated to a richly imagined setting that is every bit as memorable as the story.

This is such a timeless story that those who miss the context clues might be surprised to discover at the end of the book that it's set in the 1880s. In many ways, the story is a fairy tale, with a magical spring, a kidnapped heroine, an enchanted handsome prince, and even a bittersweet ending. Natalie Babbitt's eloquent descriptions of woods, ponds, and animals elevate the novel from mere story to a lyrical meditation on the natural order. The dog days of summer, when the earth cracks and lighting flashes without thunder, are described with exquisite clarity; cows, fish, and even one of the most memorable toads in children's literature are given personality and respect.

I was born and raised in Ohio. During my childhood, I spent most of my time drawing and reading fairy tales and myths. My mother, an amateur landscape and portrait painter, gave me art lessons. She always made sure I had enough paper, paint, pencils, and encouragement. I grew up wanting only to be an illustrator. I studied art at Laurel School in Cleveland and at Smith College.

Right after graduation, I married Samuel Fisher Babbitt, an academic administrator. I spent the next ten years in Connecticut, Tennessee, and Washington, D.C., raising our children, Christopher, Tom, and Lucy.

My husband took time out from his academic career to write a novel and discovered that he didn't enjoy the long, lonely hours that writing demanded. My sister produced a comic novel, which required substantial rewriting. I learned three valuable things from observing my husband's and sister's forays into the writer's world: You have to give writing your full attention. You have to like the revision process. And you have to like to be alone. But it was years before I put any of this to good use.

In 1966, my husband and I collaborated on a children's book called The Forty-ninth Magician — he wrote it and I illustrated it. With encouragement from our editor at Farrar, Straus & Giroux, I continued producing children's books even after my husband became too busy to write the stories.

I write for children because I am interested in fantasy and the possibilities for experience of all kinds before the time of compromise. I believe that children are far more perceptive and wise than American books give them credit for being.