To Kill a Mockingbird
by Harper Lee 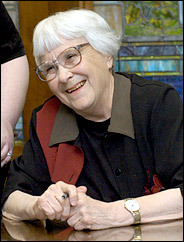 Scout (Jean Louise) Finch and her older brother Jem Finch live in the town of Maycomb, Alabama during the 1930s. Their mother has died long before the story begins, and the children are being raised by their lawyer father, Atticus, with the help of Calpurnia, the African American cook who has worked for the Finches for a long time. Jem and Scout spend their summers playing with their friend Dill Harris, who comes to stay with his aunt, Miss Rachel Haverford, every summer. One summer Dill convinces the Finch children that they should try to get the town bogeyman, Arthur "Boo" Radley, to come out of his house. Nobody has seen him for twenty years or more, and all the children are petrified of him. Jem manages to run up to the Radley house and touch it, but their games don't get much farther than that. The following fall, Scout starts first grade and the children begin finding small objects in a knothole of a tree on the corner of the Radley property. They are curious about these things, and are disappointed one day when they find that Mr. Nathan Radley, Boo's brother, has filled the hole with cement.

Their interest in Boo Radley wanes somewhat as their relations with the other children in town begin to be strained by a court case their father is working on. Atticus is defending Tom Robinson, a black man accused of raping a white woman, Mayella Ewell. Scout gets into fights with other children, and Jem tears up the camellia bushes at the house of old Mrs. Dubose, who has insulted their father. Atticus makes him apologize, and Mrs. Dubose requests that Jem come to read to her every afternoon for a month.

The following summer Dill doesn't come to visit his aunt and Atticus has to go away to sit in the legislature. During this time, Calpurnia takes the Finch children to her church and they get a glimpse of Negro life. Soon after, their Aunt Alexandra comes to live with them and tries to make the children behave properly. Dill Harris shows up soon afterwards, having run away from home, and they are all happy that he is allowed to stay for the rest of the summer.

As the trial approaches, Atticus goes out one night. The children sneak out too, and see him sitting in front of the jailhouse reading a book. A band of white men arrive, drunk and asking Atticus to let them have Tom. The children approach and break up the tension between the men and Atticus, and the gang leaves. When the trial finally begins, the children go down to the courthouse even though Atticus has told them not to. The only available seats are in the colored balcony, and from there they watch the whole trial. Atticus makes a good defense, and it becomes obvious that Mayella Ewell forced her affections on Tom. She was seen kissing Tom by her violent father, Bob Ewell, who beat her and then encouraged her to accuse Tom of rape. Tom says that he had been around the Ewell house trying to help Mayella because he felt sorry for her, and because he has one crippled hand, it is obvious that he could not have caused the injuries that she suffered.

The Ewells are furious that they have been made fools of and the jury sits out a long time, but in the end a guilty verdict is returned. Tom is sent away to a prison camp to await an appeal, and while there he tries to escape and is shot dead. The black community shows their appreciation to Atticus by leaving all sorts of food stuffs on his back porch. Bob Ewell spits in Atticus' face, harasses Tom Robinson's widow, and is suspected of having tried to break into the judge's house.

Atticus dismisses Bob Ewell's actions, saying that he's too cowardly to do anything truly dangerous. But in the fall, Jem and Scout go to a Halloween pageant, and as they are walking home at night, they are attacked in the dark. There is a scuffle, and eventually they are carried home. Jem has been knocked out and has a broken arm; Scout is confused. The doctor examines Jem, and Scout notices a stranger in the room, a man she decides must have been a country person who came to see the pageant. Sheriff Heck Tate arrives a little later with the news that Bob Ewell is lying dead down the street, stabbed between the ribs. He was the person who attacked the children, and the stranger is the person who has saved them. Scout looks at the stranger again and utters her now famous line, "Hey, Boo." Sheriff Tate tells Atticus that Bob Ewell must have fallen on his knife and that is how he will report the case. Scout walks the pale and silent Boo Radley back home, and they never see him again.

Harper Lee is an elusive figure. Since the publication of her first and only (known) novel, she has carefully guarded her privacy and does not give interviews. She was born Nelle Harper Lee on April 28, 1926 in Monroeville, Alabama. Her parents were Amasa Coleman Lee and Frances Finch Lee, and she is the youngest of four children, including two sisters and a brother. She went to Huntingdon College and the University of Alabama, where she studied law. Though her father and older sister, Alice, were lawyers, Lee herself left law school before finishing her degree. In the 1950s she worked as an airline clerk in New York City, and in 1957 she submitted the manuscript of a novel to Lippincott. For the next several years she revised this manuscript, and in 1960 To Kill a Mockingbird was published. She won the Pulitzer Prize in 1961 and was named by President Lyndon Johnson to the National Council of Arts in 1966.

In 1959 she went with her childhood friend Truman Capote (on whom the character Dill Harris is said to be based) to Kansas as a research assistant for the book that would become In Cold Blood (1966). Capote dedicated the book partially to her, and invited Lee to what has become one of the most famous parties of the twentieth century -- his glamorous Black and White ball in honor of Katherine Graham.

In 1962 the movie To Kill a Mockingbird was released. The screenplay was written by Horton Foote, and Gregory Peck went on to win a Best Actor Oscar for his portrayal of Atticus Finch. In a rare interview with Roy Newquist (published in Counterpoint, Rand McNally, 1964), Lee said "I have nothing but gratitude for the people who made the film…. I'm no judge, and the only film I've ever seen made was Mockingbird, but there seemed to be an aura of good feeling on the set." She said that at first, though she liked Gregory Peck when she met him, she was unsure that he was right for the part. However, when she saw him in costume, she said "I knew everything was going to be all right because he was Atticus."

Since it first appeared in 1960, To Kill a Mockingbird has never been out of print and is considered a classic all over the world. In recent years, Lee has split her time between New York and Monroeville, where she lives with her sister. Aside from her famous novel, Harper Lee has written only four essays for publication. Many speculate that she has written books under another name or that she has been working on her memoirs or other novels, but there is no confirmation of these rumors. However, it is hard to believe that Harper Lee has given up writing. In her interview with Newquist, she said "You know, many writers really don't like to write…. I like to write. Sometimes I'm afraid that I like it too much because when I get into work I don't want to leave it. As a result I'll go for days and days without leaving the house or wherever I happen to be. I'll go out long enough to get papers and pick up some food and that's it. It's strange, but instead of hating writing I love it too much."