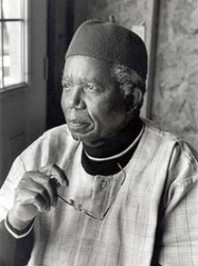 A novel of great power that turns the world upside down. The Nigerian novelist Achebe reached back to the early days of his people's encounter with colonialism, the 1890's, though the white man and his religion make an impression upon the story only in its later stages. Instead of being treated as onlookers to the arrival of the colonial power, either passive or menacing, here the Africans are center stage, capable all the while of nobility but also cruelty, wisdom and bewilderment. Okonkwo is an ambitious man within the Umuofia clan of the Igbo tribe. Determined to be a lord, he observes its rules, even the harshest of them, though that observance will eventually drive away his own son. Achebe guides us through the intricacies of Igbo culture, its profound sense of justice, its sometimes murderous rules, its noble and harmful machismo. By the time the British colonial administrator arrives towards the end of the book to dismiss the natives as savages, we know how profoundly mistaken that word is.

Chinua Achebe was born in Nigeria in 1930. He was raised in the large village of Ogidi, one of the first centers of Anglican missionary work in Eastern Nigeria, and is a graduate of University College, Ibadan.

His early career in radio ended abruptly in 1966, when he left his post as Director of External Broadcasting in Nigeria during the national upheaval that led to the Biafran War. He was appointed Senior Research Fellow at the University of Nigeria, Nsukka, and began lecturing widely abroad.

Cited in the London Sunday Times as one of the 1,000 "Makers of the Twentieth Century," for defining "a modern African literature that was truly African" and thereby making "a major contribution to world literature," Mr. Achebe has published novels, short stories, essays, and children's books. His volume of poetry, Christmas in Biafra, written during the Biafran War, was the joint winner of the first Commonwealth Poetry Prize. His novel Arrow of God was winner of the New Statesman-Jock Campbell Award, and Anthills of the Savannah was a finalist for the 1987 Booker Prize in England.

Often mentioned as a leading candidate for the Nobel Prize in Literature. Mr. Achebe holds an Honorary Fellowship of the American Academy and Institute of Arts and Letters, as well as more than twenty honorary doctorates from universities in England, Scotland, the U.S., Canada, and Nigeria. He is also the recipient of Nigeria's highest award for intellectual achievement, the Nigerian National Merit Award.