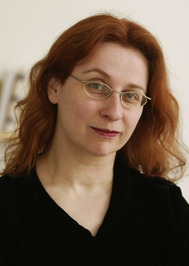 A dazzling novel in the most untraditional fashion, this is the remarkable story of Henry DeTamble, a dashing, adventuresome librarian who travels involuntarily through time, and Clare Abshire, an artist whose life takes a natural sequential course. Henry and Clare's passionate love affair endures across a sea of time and captures the two lovers in an impossibly romantic trap, and it is Audrey Niffenegger's cinematic storytelling that makes the novel's unconventional chronology so vibrantly triumphant.

An enchanting debut and a spellbinding tale of fate and belief in the bonds of love, The Time Traveler's Wife is destined to captivate readers for years to come.

Audrey Niffenegger is a professor in the M.F.A. program at the Columbia College Chicago Center for Book and Paper Arts.This is her first novel, which in hardcover was a selection of Today’s Book Club. She lives in Chicago.

In her book Three Incestuous Sisters, Audrey Niffenegger tells the tale of a trio of sisters, each with her own special trait. There is blond Bettine, the beautiful one, blue-haired Ophile, the smart one, and then there's Clothilde. While hardly unintelligent and certainly not unattractive, it is still probably no coincidence that Niffenegger decided to cast her fellow redhead Clothilde as the talented one considering that she is so abundant in talent. A gifted illustrator and writer, Niffenegger is parlaying her quirky imagination into one of the most interesting bodies of work in contemporary literature.

Niffenegger's love of writing developed when she was a young girl, quietly spending her time writing and illustrating books as a hobby. Her wonderfully eccentric imaginativeness was in play from her earliest writing efforts. "My ‘first' novel was an epic about an imaginary road trip [sic] I went on with The Beatles," she explains on her website, "handwritten in turquoise marker, seventy pages long, which I wrote and illustrated when I was eleven."

Niffenegger's mini-magical mystery tour may have been her "first novel," but the first one to which the rest of the world would be privy came many years later. She had already established herself as a prominent artist whose work had been shown in the National Museum of Women in the Arts, the Library of Congress, and the Houghton Library at Harvard University when The Time Traveler's Wife was published in 2003. "I wanted to write about a perfect marriage that is tested by something outside the control of the couple," Niffenegger told bookbrowse.com. "The title came to me out of the blue, and from the title sprang the characters, and from the characters came the story."

The Time Traveler's Wife, a sci-fi romance about the mercurial time traveler Henry and Clare, the wife who patiently awaits his return to the present, became a sensation upon its publication. This thoroughly original love story captured mass praise from USA Today, The Washington Post, People Magazine, and The Denver Post, not to mention celebrity couple Jennifer Aniston and Brad Pitt, who promptly purchased the rights to the book and are currently developing it into a motion picture.

Now that she had established herself as a talent to watch, Niffenegger finally had the opportunity to produce a book she would describe as "a fourteen-year labor of love." Three Incestuous Sisters: An Illustrated Novel, is a gorgeous, modern-gothic storybook about the love and rivalry shared between three women. With its minimal text, Niffenegger's chiefly uses her eerie illustrations to convey the sisters' story. Booklist summed up Three Incestuous Sisters quite succinctly by stating that "Niffenegger's grim yet erotic tale and stunningly moody gothic prints possess the sly subversion of Edward Gorey, the emotional valence of Edvard Munch, and her very own brilliant use of iconographic pattern, surprising perspective, and tensile line in the service of a delectable, otherworldly sensibility."

Now, Niffenegger is turning her attentions back to straight prose as she works on a new novel. "It's called Her Fearful Symmetry," she revealed in an online chat with the Hennepin County Library. "It's set in London's Highgate Cemetery, and features as many of the cliches of 19th century fiction as I can summon." Amazingly, with such a wide variety of styles in her still budding body of work -- from science fiction to fairy tale to her impending period piece -- Audrey Niffenegger's books still share a strong sense of unity, a distinctly peculiar and particular vision. "The thing that unites all my work is narrative," she said on her website. "I'm interested in telling stories, and I'm interested in creating a world that's recognizable to us as ours, but is filled with strangeness and slight changes in the rules of the universe."