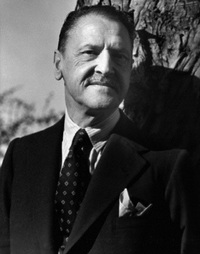 The Razor's Edge, by British novelist W. Somerset Maugham, was published in London and New York in 1944. Maugham was seventy years old when the book was published, and it was to be the last of his major novels. He was one of the most popular writers of the day, and The Razor's Edge was an immediate success on both sides of the Atlantic. More than one million copies were sold within a few years.

The novel spans a period of twenty-four years, from 1919 to 1943, and takes place in many different locations, including Chicago, Paris, London and India. It is a novel of ideas and of character. The main characters are upper-middle-class Americans, although Maugham, in his own person as the writer Somerset Maugham, is the narrator. The principal character is Larry Darrell, a former World War I aviator who is haunted by the fact that his friend was killed in the war  saving Larry's life. Seeking an answer to the question of why evil exists in the world, Larry sets out on a quest that takes him to India, where he studies with a guru and gains mystical illumination. Larry's spiritual approach to life is contrasted with the materialism of the other characters, such as Gray Maturin, who becomes a wealthy stockbroker, and Elliot Templeton, a worldly, superficial man who spends most of his time socializing at upper-class parties.

In his depiction of a young man who rejects the dominant values of American culture and looks to the East for spiritual inspiration, Maugham anticipated the work of the Beat writers of the 1950s and the values of the counterculture of the 1960s.

W. Somerset Maugham was born in 1874 and lived in Paris until he was ten. He was educated at King's School, Canterbury, and at Heidelberg University. He afterwards walked the wards of St. Thomas's Hospital with a view to practice in medicine, but the success of his first novel, Liza of Lambeth (1897), won him over to letters. Something of his hospital experience is reflected, however, in the first of his masterpieces, Of Human Bondage (1915), and with The Moon and Sixpence (1919) his reputation as a novelist was assured.

His position as one of the most successful playwrights on the London stage was being consolidated simultaneously. His first play, A Man of Honour (1903), was followed by a procession of successes just before and after the First World War. (At one point only Bernard Shaw had more plays running at the same time in London.) His theatre career ended with Sheppey (1933).

His fame as a short-story writer began with The Trembling of a Leaf, sub-titled Little Stories of the South Sea Islands, in 1921, after which he published more than ten collections.

W. Somerset Maugham's general books are fewer in number. They include travel books, such as On a Chinese Screen (1922) and Don Fernando (1935), essays, criticism, and the self-revealing The Summing Up (1938) and A Writer's Notebook (1949).