The Pilot's Wife
by Anita Shreve 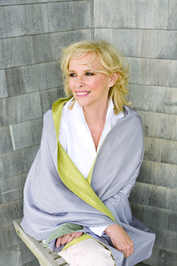 Who can guess what a woman will do when the unthinkable becomes her reality?

Until now, Kathryn Lyons's life has been peaceful if unextraordinary: a satisfying job teaching high school in the New England mill town of her childhood; a picture-perfect home by the ocean; a precocious, independent-minded fifteen-year-old daughter; and a happy marriage whose occasional dull passages she attributes to the unavoidable deadening effect of time. As a pilot's wife, Kathryn has learned to expect both intense exhilaration and long periods alone--but nothing has prepared her for the late-night knock that lets her know her husband has died in a crash.

As Kathryn struggles with her grief, she descends into a maelstrom of publicity stirred up by the modern hunger for the details of tragedy. Even before the plane is located in waters off the Irish coast, the relentless focus on her husband's life begins to bring a bizarre personal mystery into focus. Could there be any truth to the increasingly disturbing rumors that he had a secret?

Fighting the impulse to protect herself and her daughter from the details of the crash and the mystery surrounding it, Kathryn sets out to learn who her husband really was-- whatever that knowledge may cost. The search will lead her to shocking revelations, testing both the truth of her marriage and the limits of her ability to face it.

From the bestselling author of The Weight of Water, this taut, impassioned novel asks fundamental questions we all have about how well we can really know anyone--even those (or especially those) we love the most. Written with grace and controlled beauty, The Pilot's Wife definitively places Anita Shreve among the ranks of the best novelists writing today.

Anita Shreve is the author of the novels The Pilot's Wife, The Weight of Water, Eden Close, Strange Fits of Passion, Where or When, and Resistance. She teaches writing at Amherst College and divides her time between Massachusetts and New Hampshire.

Anita Shreve began writing fiction while working as a high school teacher. Although one of her first published stories, "Past the Island, Drifting," was awarded an O. Henry Prize in 1975, Shreve felt she couldn't make a living as a fiction writer so she became a journalist. She traveled to Africa, and spent three years in Kenya, writing articles that appeared in magazines such as Quest, US, and Newsweek. Back in the United States, she turned to raising her children and writing freelance articles for magazines. Shreve later expanded two of these articles -- both published in the New York Times Magazine -- into the nonfiction books Remaking Motherhood and Women Together, Women Alone. At the same time Shreve also began working on her first novel, Eden Close. With its publication in 1989, she gave up journalism for writing fiction full time, thrilled, as she says, with "the rush of freedom that I could make it up."