Their Eyes Were Watching God
by Zora Neale Hurston 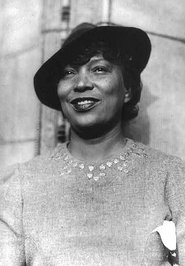 To call Zora Neale Hurston's Their Eyes Were Watching God an "African American feminist classic" may be an accurate statement-it is certainly a frequent statement-but it is a misleadingly narrow and rather dull way to introduce a vibrant and achingly human novel. The syncopated beauty of Hurston's prose, her remarkable gift for comedy, the sheer visceral terror of the book's climax, all transcend any label that critics have tried to put on this remarkable work. First published amid controversy in 1937, then rescued from obscurity four decades later, the novel narrates Janie Crawford's ripening from a vibrant, but voiceless, teenage girl into a woman with her finger on the trigger of her own destiny. Although Hurston wrote the novel in only seven weeks, Their Eyes Were Watching God breathes and bleeds a whole life's worth of urgent experience.

Under "a blossoming pear tree" in West Florida, sixteen-year-old Janie Mae Crawford dreams of a world that will answer all her questions and waits "for the world to be made." But her grandmother, who has raised her from birth, arranges Janie's marriage to an older local farmer. So begins Janie's journey toward herself and toward the farthest horizon open to her. Zora Neale Hurston's classic 1937 novel follows Janie from her Nanny's plantation shack, to Logan Killicks's farm, to all-black Eatonville, to the Everglades, and back to Eatonville--where she gathers in "the great fish-net" of her life. Janie's joyless marriage to Killicks lasts until Joe Starks passes by, on his way to becoming "a big voice." Joe becomes mayor of Eatonville and is just as determined as Killicks was to keep Janie in her proper place. Through twenty years with Joe, she continues to cope, hope, and dream; and after Joe's death, she is once again "ready for her great journey," a journey she now undertakes with one Vergible Woods, a.k.a. Tea Cake. Younger than Janie, Tea Cake nevertheless engages both her heart and her spirit. With him Janie can finally enjoy life without being one man's mule or another's bauble. Their eventful life together "on de muck" of the Everglades eventually brings Janie to another of her life's turning points; and after burying Tea Cake, she returns to a gossip-filled Eatonville, where she tells her story to her best friend, Pheoby Watson, and releases Pheoby to tell that story to the others. Janie has "done been tuh de horizon and back." She has learned what love is; she has experienced life's joys and sorrows; and she has come home to herself in peace.