The Heart Is a Lonely Hunter
by Carson McCullers 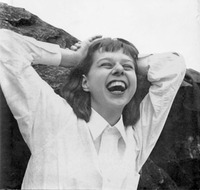 When The Heart Is a Lonely Hunter, Carson McCullers's literary debut, was first published by Houghton Mifflin, on June 4, 1940, the twenty-three-year-old author became a literary sensation virtually overnight. The novel is considered McCullers's finest work, an enduring masterpiece that was chosen by the Modern Library as one of the top one hundred works of fiction published in the twentieth century.

Set in a small Southern mill town in the 1930s, The Heart Is a Lonely Hunter is a haunting, unforgettable story that gives voice to the rejected, the forgotten, and the mistreated. At the novel's center is the deaf-mute John Singer, who is left alone after his friend and roommate, Antonapoulos, is sent away to an asylum. Singer moves into a boarding house and begins taking his meals at the local diner, and in this new setting he becomes the confidant of several social outcasts and misfits. Drawn to Singer's kind eyes and attentive demeanor are Mick Kelly, a spirited young teenager with dreams greater than her economic means; Jake Blount, an itinerant social reformer with a penchant for drink and violence; Biff Brannon, the childless proprietor of the local café; and Dr. Copeland, a proud black intellectual whose unwavering ideals have left him alienated from those who love him.

With its profound sense of moral isolation, compassionate glimpses into its characters' inner lives, and deft portrayal of racial tensions in the South, The Heart Is a Lonely Hunter is considered one of the most extraordinary debuts in modern American literature. Richard Wright praised McCullers for her ability "to rise above the pressures of her environment and embrace white and black humanity in one sweep of apprehension and tenderness." The Heart Is a Lonely Hunter is Carson McCullers at her endearing best, and just as timely and powerful today as when it was first published.

Carson McCullers was born Lula Carson Smith on February 19, 1917, in Columbus, Georgia. A promising pianist, McCullers enrolled in the Juilliard School of Music in New York when she was seventeen, but lacking the money for tuition, she did not attend classes. Eventually she studied writing at New York University and Columbia University, which ultimately led to the publication of her first short story, "Wunderkind," in Story magazine. In 1937, Carson married fellow writer James Reeves McCullers. Less than three years later, when she was twenty-three, she published her first novel, The Heart Is a Lonely Hunter. She went on to write Reflections in a Golden Eye, The Member of the Wedding, The Ballad of the Sad Café, and Clock Without Hands, among other works. The recipient of two Guggenheim fellowships, McCullers also won awards for her Broadway stage adaptation of The Member of the Wedding. Plagued by a series of strokes, attributed to a misdiagnosed and untreated case of childhood rheumatic fever, Carson McCullers died in Nyack, New York, at age fifty.

With a body of work including five novels, two plays, twenty short stories, more than two dozen nonfiction pieces, a book of verse for children, a small number of poems, and an unfinished autobiography, McCullers is considered among the most significant American writers of the twentieth century.