The Glass Castle
by Jeannette Walls 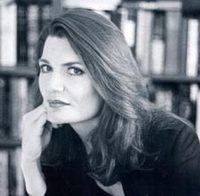 The Glass Castle is a remarkable memoir of resilience and redemption, and a revelatory look into a family at once deeply dysfunctional and uniquely vibrant. When sober, Jeannette's brilliant and charismatic father captured his children's imagination, teaching them physics, geology, and how to embrace life fearlessly. But when he drank, he was dishonest and destructive. Her mother was a free spirit who abhorred the idea of domesticity and didn't want the responsibility of raising a family.

The Walls children learned to take care of themselves. They fed, clothed, and protected one another, and eventually found their way to New York. Their parents followed them, choosing to be homeless even as their children prospered.

The Glass Castle is truly astonishing -- a memoir permeated by the intense love of a peculiar, but loyal, family. Jeannette Walls has a story to tell, and tells it brilliantly, without an ounce of self-pity.

One of four siblings, Jeannette Walls was born in Phoenix, Arizona in 1960. Her family lived in various southwestern towns before settling in Welch, West Virginia when she was ten. She moved to New York City at age 17 and graduated from Columbia University's Barnard College with honors in 1984. She went on to become a reporter for New York magazine, Esquire and USA Today. She has appeared regularly on television, including the Today Show, CNN and PrimeTimeLive and is widely known as a former gossip columnist for MSNBC.com.

She currently lives in northern Virginia and is married to writer John Taylor. Her memoir, The Glass Castle (2005) was a New York Times bestseller with movie rights optioned by Paramount (but as of October 2009 there is no sign of the movie entering production). Her next book, Half Broke Horses: A True-Life Novel, was published in October 2009.