The Fault in Our Stars
by John Green 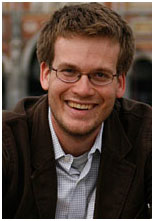 Sixteen year-old Hazel Grace Lancaster is forced by her parents to attend a support group for children living with cancer. Hazel was diagnosed with Stage 4 Thyroid cancer when she was 13, but has managed to live with her disease thanks to an experimental drug. At support group she meets Augustus "Gus" Waters, a former basketball star who lost his right leg to osteosarcoma, and is in remission. Hazel convinces Augustus to read 'An Imperial Affliction', her favorite book, and he becomes almost as obsessed with it as she is. In addition to countless text messages and phone calls, Hazel and Gus begin to spend more time together.

As their relationship deepens, Hazel begins to feel herself pulling away from Gus. Gus had saved his wish from "The Genies" (a fictionalized version of the Make a Wish Foundation), and wants to use it to fly himself and Hazel to Amsterdam, Netherlands to meet Peter van Houten, the reclusive author of 'An Imperial Affliction'. While she is overjoyed by the proposal, she decides that she does not want to pursue a relationship with Gus, so that she can minimize the pain her eventual death will cause him.

Hazel realizes that she sees herself as a grenade, and her tearful admission of this scares her parents, although they do their best to comfort her. After waking up in agony, Hazel is admitted to the hospital with serious pneumonia. During her week of convalescence, Gus visits several times, and informs her that he cares about her more than he worries about the pain she could cause him. After her release, she realizes she's in love with him, and after some consultation with her doctors, she is cleared to fly to Amsterdam with Gus and her mother to meet van Houten.

On their first night in Amsterdam, they are treated to an elaborate meal, courtesy of van Houten. Their meeting with the author goes less smoothly, as it emerges that Lidewij, his assistant, set it up without his full knowledge in the hopes that it would inspire him to give up alcohol and write again. Van Houten is scornful and rude to the teens, and refuses to answer their questions. Distraught by their reception, Hazel and Augustus leave van Houten's house, accompanied by a disgusted Lidewij. She takes them to the Anne Frank house, where they kiss to thunderous applause. When they return to the hotel, Hazel's mother has left to run errands, and they have sex for the first time.

Afterwards, Augustus reveals that his cancer has returned and has metastasized to several other parts of his body. Even though he starts an aggressive treatment regimen when they return home, he is not expected to survive long. Shortly before he dies, he asks Hazel and Isaac, another friend, to conduct a pre-funeral for him, so that he can hear how they will memorialize him.

Eight days later, Gus dies, and Hazel speaks at his funeral. Instead of the earnest speech she gave to him and Isaac, she repeats platitudes that will reassure his parents. After the funeral, she meets van Houten, who traveled to America to be there. He reveals that he had a daughter who died of cancer several years ago. She provided the inspiration for Anna, the main character of 'An Imperial Affliction' and his rudeness can be partially attributed to Hazel's appearance (she looks and dresses identically to Anna). Hazel encourages him to get sober and write a sequel.

She also discovers Augustus had been writing something for her, although the pages were torn out of his notebook. Eventually, she is able to track the pages to Amsterdam, and after an email to Lidewij, they are retrieved from van Houten. Augustus wanted van Houten to turn his notes into a fitting eulogy for Hazel, but van Houten decides to leave Augustus's words alone.

The book ends with Hazel accepting Augustus's eulogy with a present tense, "I do."

John Green is the New York Times bestselling author of Looking for Alaska, An Abundance of Katherines, Paper Towns, and The Fault in Our Stars. He is also the coauthor, with David Levithan, of Will Grayson, Will Grayson. He was 2006 recipient of the Michael L. Printz Award, a 2009 Edgar Award winner, and has twice been a finalist for the Los Angeles Times Book Prize. Green’s books have been published in more than a dozen languages.

In 2007, Green and his brother Hank ceased textual communication and began to talk primarily through videoblogs posted to YouTube. The videos spawned a community of people called nerdfighters who fight for intellectualism and to decrease the overall worldwide level of suck. (Decreasing suck takes many forms: Nerdfighters have raised hundreds of thousands of dollars to fight poverty in the developing world; they also planted thousands of trees around the world in May of 2010 to celebrate Hank’s 30th birthday.) Although they have long since resumed textual communication, John and Hank continue to upload two videos a week to their YouTube channel, vlogbrothers. Their videos have been viewed more than 200 million times, and their channel is one of the most popular in the history of online video. He is also an active Twitter user with more than 1.2 million followers.

Green’s book reviews have appeared in The New York Times Book Review and Booklist, a wonderful book review journal where he worked as a publishing assistant and production editor while writing Looking for Alaska. Green grew up in Orlando, Florida before attending Indian Springs School and then Kenyon College.