The Brief Wondrous Life of Oscar Wao
by Junot Díaz 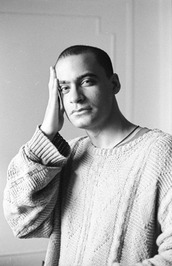 This is the long-awaited first novel from one of the most original and memorable writers working today.

Things have never been easy for Oscar, a sweet but disastrously overweight, lovesick Dominican ghetto nerd. From his home in New Jersey, where he lives with his old-world mother and rebellious sister, Oscar dreams of becoming the Dominican J. R. R. Tolkien and, most of all, of finding love. But he may never get what he wants, thanks to the fukú – the curse that has haunted the Oscar's family for generations, dooming them to prison, torture, tragic accidents, and, above all, ill-starred love. Oscar, still waiting for his first kiss, is just its most recent victim.

Diaz immerses us in the tumultuous life of Oscar and the history of the family at large, rendering with genuine warmth and dazzling energy, humor, and insight the Dominican–American experience, and, ultimately, the endless human capacity to persevere in the face of heartbreak and loss. A true literary triumph, The Brief Wondrous Life of Oscar Wao confirms Junot Diaz as one of the best and most exciting voices of our time.

Junot Díaz is a contemporary writer. He moved to the United States with his parents at age six, settling in New Jersey. Central to Díaz's work is the duality of the immigrant experience.

Díaz was born in Villa Juana, a barrio in Santo Domingo, Dominican Republic. He was the third child in a family of five. Throughout most of his early childhood he lived with his mother and grandparents while his father worked in the United States. Díaz immigrated to Parlin, New Jersey in December, 1974, where he was re-united with his father.

He attended Kean College in Union, New Jersey for one year before transferring and ultimately completing his BA at Rutgers College in 1992, majoring in English; there he was involved in a creative-writing livinglearning residence hall and in various student organizations and was exposed to the authors who would motivate him into becoming a writer: Toni Morrison and Sandra Cisneros. He worked his way through college: delivering pool tables, washing dishes, pumping gas and working at Raritan River Steel.

After graduating from Rutgers he was employed at Rutgers University Press as an editorial assistant. He earned his MFA from Cornell University in Ithaca, New York in 1995, where he wrote most of his first collection. Diaz has said he was stunned when he received an acceptance letter from Cornell because he had not applied there. Apparently his then-girlfriend applied on his behalf.

Díaz is active in Dominican community and teaches creative writing at the Massachusetts Institute of Technology, and is also the fiction editor for the Boston Review. He is a founding member of the Voices of Writing Workshop, a writing workshop focused on writers of color.

His fiction has appeared in The New Yorker magazine which listed him as one of the 20 top writers for the 21st century. He has also been published in Story, The Paris Review, and in the anthologies Best American Short Stories four times (1996, 1997, 1999, 2000), and African Voices. He is best known for his two major works: the short story collection Drown (1996) and the novel The Brief Wondrous Life of Oscar Wao (2007). Both were published to critical acclaim.

He has received a Eugene McDermott Award, a fellowship from the John Simon Guggenheim Memorial Foundation, a Lila Acheson Wallace Readers Digest Award, the 2002 Pen/Malamud Award, the 2003 US Japan Creative Artist Fellowship from the National Endowment for the Arts, a fellowship at the Radcliffe Institute for Advanced Study at Harvard University and the Rome Prize from the American Academy of Arts and Letters. He won the 2007 Sargant First Novel Prize and was selected as one of the 39 most important Latin American writers under the age of 39 by the Bogotá Book Capital of World and the Hay Festival. In September of 2007, Miramax acquired the rights for a film adaptation of The Brief and Wondrous Life of Oscar Wao.