The Age of Innocence
by Edith Wharton 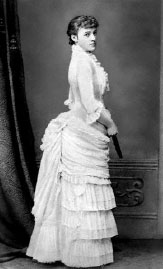 Newland Archer, gentleman lawyer and heir to one of New York City's best families, is happily anticipating a highly desirable marriage to the sheltered and beautiful May Welland. Yet he finds reason to doubt his choice of bride after the appearance of Countess Ellen Olenska, May's exotic, beautiful thirty-year-old cousin, who has been living in Europe. Ellen has returned to New York after scandalously separating herself (per rumor) from a bad marriage to a Polish Count. At first, Ellen's arrival and its potential taint to his bride's family disturbs him, but he becomes intrigued by the worldly Ellen who flouts New York society's fastidious rules. As Newland's admiration for the countess grows, so does his doubt about marrying May, a perfect product of Old New York society; his match with May no longer seems the ideal fate he had imagined.

Ellen's decision to divorce Count Olenski is a social crisis for the other members of her family, who are terrified of scandal and disgrace. Living apart can be tolerated, but divorce is unacceptable. To save the Welland family's reputation, a law partner of Newland asks him to dissuade Countess Olenska from divorcing the Count. He succeeds, but in the process comes to care for her; afraid of falling in love with Ellen, Newland begs May to accelerate their wedding date; May refuses. Newland tells Ellen he loves her; Ellen corresponds, but is horrified of their love's aggrieving May. She agrees to remain in America, separated but still married, only if they do not sexually consummate their love; Newland receives May's telegram agreeing to wed sooner.

Newland and May marry; he tries forgetting Ellen but fails. His society marriage is loveless, and the social life he once found absorbing has become empty and joyless. Though Ellen lives in Washington and has remained distant, he is unable to cease loving her. Their paths cross while he and May are in Newport, Rhode Island. Newland discovers that Count Olenski wishes Ellen to return to him, and she has refused, despite her family pushing her to reconcile with her husband and return to Europe. Frustrated by her independence, the family cut off her money, as the Count had already done. Newland desperately seeks a way to leave May and be with Ellen, obsessed with how to finally possess her. Despairing of ever making Ellen his wife, he attempts to have her agree to be his mistress. Then Ellen is recalled to New York City to care for her sick grandmother, who accepts her decision to remain separated and agrees to reinstate her allowance.

Back in New York and under renewed pressure from Newland, Ellen relents and agrees to consummate their relationship. However, Newland then discovers that Ellen has decided to return to Europe. Newland makes up his mind to abandon May and follow Ellen to Europe when May announces that she and Newland are throwing a farewell party for Ellen. That night, after the party, Newland resolves to tell May he is leaving her for Ellen. She interrupts him to tell him that she learned that morning that she is pregnant; she reveals that she had told Ellen of her pregnancy two weeks earlier, despite not being sure of it at the time. The implication is that she did it because she suspected the affair. Newland guesses that this is Ellen's reason for returning to Europe. Hopelessly trapped, Newland decides not to follow Ellen, surrendering his love for the sake of his children, remaining in a loveless marriage to May.

Twenty-six years later, after May's death, Newland and his son are in Paris. The son, learning that his mother's cousin lives there, has arranged to visit Ellen in her Paris apartment. Newland is stunned at the prospect of seeing Ellen again. On arriving outside the apartment building, Newland, still reeling emotionally, sends up his son alone to meet Ellen, while he waits outside, watching her apartment's balcony. Newland considers going up, but decides that his dream and memory of Ellen are more real than anything else in his life has been; he walks back to his hotel without seeing her.

Edith Wharton (1862-1937), born to a wealthy and fashionable New York family, was raised and educated by governesses and tutors as the family moved between houses in Paris, New York City, and Newport, Rhode Island. She published her first book, a slim volume of poetry, at the age of sixteen. Wharton's patriarchal and socially conservative family disregarded her literary work, thinking it an inappropriate, even embarrassing, eccentricity.

Wharton married Boston banker Edward Robbins Wharton in 1885, but the marriage was not a particularly happy one. Wharton moved to France in 1907 and the couple divorced in 1913. After publishing a number of stories in popular magazines, including The Atlantic Monthly and Scribner's, she set out to write serious fiction. Following the example of her friend and mentor, Henry James, Wharton took up the novel of manners, chronicling the customs and beliefs of her social class. Over the next forty years, she published eleven collections of stories and sixteen novels, including The House of Mirth (1905), Ethan Frome (1911), and The Age of Innocence (1920), the last of which won the Pulitzer Prize in Fiction. She also published works on travel and interior design.

In Paris during World War I, Wharton worked tirelessly as the head of the American Hostels for Refugees and wrote of her experiences in Fighting France (1915). For her work during the war, she was made a chevalier of the French Legion of Honor. She filled her later years with the company of artists and intellectuals, a coterie that, in addition to Henry James, included Jean Cocteau and Sinclair Lewis, who dedicated Babbitt to Wharton. She was the first woman to be elected to the American Academy of Arts and Letters and to receive an honorary doctorate of letters from Yale University. Wharton died of a stroke in her home in France, having lived as an expatriate for much of her life.