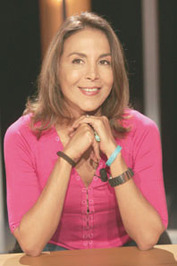 Malika Oufkir and her family spent more than twenty years in prison at the hands of the Moroccan government. In 1972, her father, the King of Morocco’s highest aide, was arrested and executed for his alleged part in a plot to assassinate the King. Malika, who spent many years living at the Palace as a companion to Princess Amina, suddenly found herself betrayed by the person she had come to regard as a father figure. She and her family were caught in the midst of a violent political turmoil beyond their control. In Stolen Lives, Malika recounts the long years that she, her five siblings, and her mother spent trying to survive in the worst of conditions. Filled with honesty, emotion, and humor, Stolen Lives is a gripping and heartrending account of one family’s unbreakable bond and a testament to the resilience of the human spirit.

The eldest daughter of General Oufkir, the King of Morocco's closest aide, Malika Oufkir was adopted by the king at age of five as a companion for his daughter. She spent most of her childhood and adolescence within the gilded walls of the palace, living an extraordinarily privileged yet secluded life. Her world was shattered on August 16, 1972, when her father was executed for his part in an attempt to assassinate the King. Along with her mother and five siblings, Malika, then nineteen, was imprisoned in a penal colony. The Oufkir family spent the next fifteen years in prison, the last ten in solitary confinement, until they managed to dig a tunnel and escape. Their freedom ended five days later, however, when they were captured and returned to prison. In 1996, after twenty-four years of incarceration, the Oufkir family was finally granted permission to leave Morocco.

MALIKA OUFKIR, born in 1953, divides her time between Miami and Marrakesh where she lives with her husband and children.

MICHELE FITOUSSI is of Tunisian descent, and is the author of two novels and a collection of short stories as well as being the literary editor of French Elle.