Snow in August
by Pete Hamill 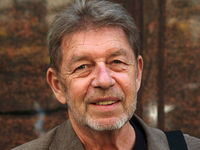 In Brooklyn in 1947, Michael Devlin, an 11-year-old Irish kid who spends his days reading Captain Marvel and anticipating the arrival of Jackie Robinson, makes the acquaintance of a recently emigrated Orthodox rabbi. In exchange for lessons in English and baseball, Rabbi Hirsch teaches him Yiddish and tells him of Jewish life in old Prague and of the mysteries of the Kabbalah. Anti-Semitism soon rears its head in the form of a gang of young Irish toughs out to rule the neighborhood. As the gang escalates its violence, it seems that only being as miraculously powerful as Captain Marvel—or a golem—could stop them. Strongly evoking time and place this coming-of-age tale serves up a hearty dose of magical realism mixed in. (from Library Journal review)

Pete Hamill is a novelist, essayist and journalist whose career has endured for more than forty years. He was born in Brooklyn, N. Y. in 1935, the oldest of seven children of immigrants from Belfast, Northern Ireland. He attended Catholic schools as a child. He left school at 16 to work in the Brooklyn Navy Yard as a sheet metal worker, and then went on to the United States Navy. While serving in the Navy, he completed his high school education. Then, using the educational benefits of the G.I. Bill of Rights, he attended Mexico City College in 1956-1957, studying painting and writing, and later went to Pratt Institute.

As a journalist, he has covered wars in Vietnam, Nicaragua, Lebanon and Northern Ireland, and has lived for extended periods in Mexico City, Dublin, Barcelona, San Juan and Rome. From his base in New York he has also covered murders, fires, World Series, championship fights and the great domestic disturbances of the 1960s, and has written extensively on art, jazz, immigration and politics. He witnessed the events of September 11, 2001 and its aftermath and wrote about them for the Daily News.

At the same time, Hamill has written much fiction, including movie and TV scripts. He has published nine novels and two collections of short stories. His 1997 novel, Snow in August, was on the New York Times best-seller list for four months. His memoir, A Drinking Life, was on the same New York Times list for 13 weeks. He has published two collections of his journalism (Irrational Ravings and Piecework), an extended essay on journalism called News Is A Verb, a book about the relationship of tools to art, a biographical essay called Why Sinatra Matters, dealing with the music of the late singer and the social forces that made his work unique. In 1999, Harry N. Abrams published his acclaimed book on the Mexican painter Diego Rivera. His latest novel, Forever, was published by Little, Brown in January 2003 and became a New York Times best-seller. In 2004, he published “Downtown: My Manhattan”, a non-fiction account of his love affair with New York and received much critical acclaim.

Hamill is the father of two daughters, and has a seven-year-old grandson. He is married to the Japanese journalist, Fukiko Aoki, and they divide their time between New York City and Cuernavaca, Mexico. He is a Distinguished Writer in Residence at New York University and is writing a new novel.