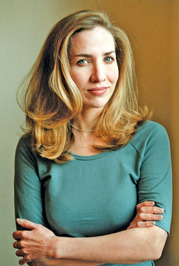 Laura Hillenbrand has been writing about history and thoroughbred racing since 1988 and has been a contributing writer/editor at Equus magazine since 1989. Her work has also appeared in American Heritage, ABC Sports Online, Thoroughbred Times, Talk, and many other publications. Her 1998 American Heritage article on Seabiscuit won the Eclipse Award for magazine writing. She is currently serving as a consultant on a Universal Pictures movie based on this book. She lives in Washington, DC.

Seabiscuit was an unlikely champion. For two years he floundered at the lowest level of racing, before his dormant talent was discovered by three men. One was Tom Smith, an arthritic old mustang breaker. The second was Red Pollard, a half-blind jockey. The third was Charles Howard, a former bicycle repairman who made a fortune by introducing the automobile to the American West. Bought for a bargainbasement price by Howard and rehabilitated by Smith and Pollard, Seabiscuit overcame a phenomenal run of bad fortune to become one of the most spectacular, charismatic performers in the history of sports.