My Ántonia
by Willa Cather 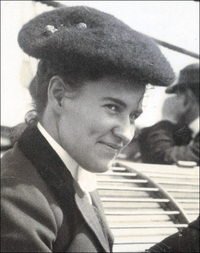 Widely recognized as Willa Cather's greatest novel, My Ántonia is a soulful and rich portrait of a pioneer woman's simple yet heroic life. The spirited daughter of Bohemian immigrants, Antonia must adapt to a hard existence on the desolate prairies of the Midwest. Enduring childhood poverty, teenage seduction, and family tragedy, she eventually becomes a wife and mother on a Nebraska farm. The book is also a hauntingly eloquent celebration of the strength, courage, and spirit of America's early pioneers.

My Ántonia tells the stories of several immigrant families who move out to rural Nebraska to start new lives in America, with a particular focus on a Bohemian family, the Shimerdas, whose eldest daughter is named Ántonia. The book's narrator, Jim Burden, arrives in the fictional town of Black Hawk, Nebraska, on the same train as the Shimerdas, as he goes to live with his grandparents after his parents have died. Jim develops strong feelings for Ántonia, something between a crush and a filial bond, and the reader views Ántonia's life, including its attendant struggles and triumphs, through that lens.

Willa Cather (1873-1947), the Pulitzer Prize-winning author of more than fifteen books, was one of the most distinguished American writers of the early twentieth century. Cather's work made her one of the most important American novelists of the first half of the 20th century. When Cather was nine, her family homesteaded in pioneer Nebraska. She was a tomboy at home in the saddle. enjoyed distinguished careers as journalist, editor, and fiction writer. Cather is most often thought of as a chronicler of the pioneer American West. Critics note that the themes of her work are intertwined with the universal story of the rise of civilizations in history, the drama of the immigrant in a new world, and views of personal involvements with art. Cather's fiction is characterized by a strong sense of place, the subtle presentation of human relationships, an often unconventional narrative structure, and a style of clarity and beauty.