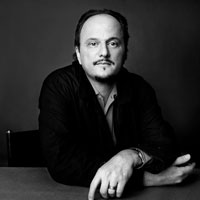 "I was born twice: first, as a baby girl, on a remarkably smogless Detroit day in January of 1960; and then again, as a teenage boy, in an emergency room near Petoskey, Michigan, in August of 1974." And so begins Middlesex, the mesmerizing saga of a near-mythic Greek American family and the "roller-coaster ride of a single gene through time." The odd but utterly believable story of Cal Stephanides, and how this 41-year-old hermaphrodite was raised as Calliope, is at the tender heart of this long-awaited second novel from Jeffrey Eugenides.

Eugenides is the recipient of many awards, including fellowships from the Guggenheim Foundation and the National Endowment for the Arts, a Whiting Writers' Award, and the Henry D. Vursell Memorial Award from the American Academy of Arts and Letters. In the past few years he has been a Fellow of the Berliner Künstlerprogramm of the DAAD and of the American Academy in Berlin.

After spending some time in Berlin, Eugenides now lives in Chicago with his wife and daughter where he is on the faculty of Princeton University's Program in Creative Writing. In January 2008 he published an anthology, My Mistress's Sparrow Is Dead: Great Love Stories from Chekhov to Munro, the proceeds of which will go directly to fund the free youth writing programs offered by 826 Chicago which is part of the network of seven writing centers across the United States affiliated with 826 National, a non-profit organization dedicated to supporting students ages 6 to 18 with their creative and expository writing skills, and to helping teachers inspire their students to write.