Life of Pi
by Yann Martel 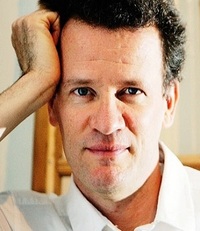 Piscine Molitor Patel, the son of an Indian zookeeper in Pondicherry, narrates the strange story of his life to the novel's narrator. Now living in Canada, he begins his narrative back in India when as a child he developed his peculiar religious convictions -- peculiar because Piscine ("Pi" as he becomes known) decides to embrace Christianity, Hinduism, and Islam at the same time. His frustrated parents don't know what to make of Pi's unorthodox devotion to three religions, but Pi himself sees no contradiction between his sets of beliefs.

When the family zoo falls on hard times, Pi's father decides to move the family to Canada in search of a new life. They travel on a Japanese  cargo ship, along with many of their animals, and begin the long journey across the Pacific. The ship does not make it far beyond the Philippines, though, before encountering a strong storm. In mysterious circumstances the animals are released from their cages and the ship ruptures and begins to founder. Pi scrambles for safety, but when the confusion fades, he finds himself alone in a life raft with a zebra, a hyena, an orangutan, and Richard Parker -- a full-grown male Bengal tiger.

Pi's narrative of his life now takes on the familiar outlines of the "lost at sea" story, except for the presence of the animals on the raft and Pi's own interest in discussing faith and God and his philosophy of life while attempting to fend off dehydration and a tiger. In fairly short order all the animals except Richard Parker are dead and life on the raft settles into uneasy co-existence between Pi and the tiger. They enter a daily rhythm of subsistence, searching for fish and water, sleeping during the heat of the day, letting the raft drift along with the ocean currents. Richard Parker, a constant source of terror, becomes also the only companion Pi has for many months, and the animal ferocity of the tiger inspires Pi with a desire to live even as he faces despair at being rescued.

Pi's narrative grows increasingly fantastic as it progresses, reaching at last a point of pure fantasy. The last bit that he narrates is of his washing ashore on a Mexican beach and of Richard Parker's disappearance into the wilderness. The narrator takes over the story again at this point, inserting the results of his own research into what really happened on Pi's journey, casting doubt on everything Pi has narrated about his fantastic journey, but in such a way that the trip takes on a new horror and beauty and power -- and says even more about Pi's favorite theme, the love of God.

Yann Martel was born in Spain in 1963. His parents served as diplomats and traveled the world, with Martel growing up in such places as Alaska, Costa Rica, France, and Mexico. In addition to his work as a diplomat, Martel's father was also a poet and writer whose work helped launch Yann into his own career writing novels. Martell eventually attended Trent University, where he studied philosophy and began to write. By age 27 he had taken up writing as his full-time job, earning his living from it and traveling when able. He has spent time in Iran, Turkey, Ecuador, Peru, and India, including a six month stint in southern India while doing research for the novel that would become Life of Pi.

His writing includes a collection of short stories, The Facts Behind Helsinki Roccamatios and Other Stories, as well as a novel called Self, neither of which created any critical or popular interest and which Martel himself has described as "bad".

It was in preparing for a new novel to follow Self that Martel traveled to India, but he found that his new project simply fizzled out and it was there that he remembered an intriguing premise he had once come across in the review of a book by the Brazilian writer Moacyr Scliar: a small boy trapped in a lifeboat with a black panther. The idea felt so right for a book that Martel abandoned his previous project and spent the next months interviewing zookeepers and animal experts in Southern India and in reading survival stories and religious texts. The result was his second novel, Life of Pi, which appeared in 2001 and became a runaway bestseller of a novel. The book managed to win the Booker Prize and then became entangled in a debate over inspiration and plagiarism [http://books.guardian.co.uk/bookerprize2002/story/0,12350,836092,00.html] that only helped to turn Martel into a literary celebrity. He currently lives in Berlin, where his parents reside, both of whom are now literary translators and are currently translating Life of Pi into French.