Life As We Knew It
by Susan Beth Pfeffer 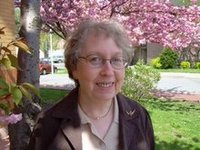 When Miranda first hears the warnings that a meteor is headed on a collision path with the moon, they just sound like an excuse for extra homework assignments. But her disbelief turns to fear in a split second as the entire world witnesses a lunar impact that knocks the moon closer in orbit, catastrophically altering the earth's climate. Everything else in Miranda's life fades away as supermarkets run out of food, gas goes up to more than ten dollars a gallon, and school is closed indefinitely. But what Miranda and her family don't realize is that the worst is yet to come.

Susan Beth Pfeffer was born in New York City in 1948. She grew up in the city and its nearby suburbs and spent summers in the Catskill Mountains. When she was six her father wrote and published a book on constitutional law, and Pfeffer decided that she, too, wanted to be a writer. That year she wrote her first story, about the love between an Oreo cookie and a pair of scissors. However, it wasn't until 1970 that her first book, Just Morgan, was published. She wrote it during her last semester at New York University; since then, she has been a full-time writer for young people.

She has won numerous awards and citations for her work, which range from picture books to middle-grade and young-adult novels, and include both contemporary and historical fiction. She is also the author of the popular Portraits of Little Women series for grades 3-6, and has written a book for adults on writing for children.

When she is not working, she enjoys watching movies, both new and old, and collecting movie memorabilia, reading biographies and histories, and eating foods that are bad for her. She lives in Middletown, New York, with her two cats, Alexander and Emily. (From www.bookbrowse.com )