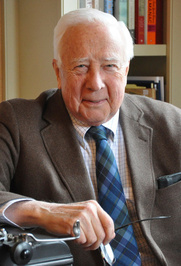 In this powerful, epic biography, David McCullough unfolds the adventurous life-journey of John Adams, the brilliant, fiercely independent, often irascible, always honest Yankee patriot -- "the colossus of independence," as Thomas Jefferson called him—who spared nothing in his zeal for the American Revolution; who rose to become the second President of the United States and saved the country from blundering into an unnecessary war; who was learned beyond all but a few and regarded by some as "out of his senses"; and whose marriage to the wise and valiant Abigail Adams is one of the moving love stories in American history.

Like his masterly, Pulitzer Prize-winning biography Truman, David McCullough's John Adams has the sweep and vitality of a great novel. It is both a riveting portrait of an abundantly human man and a vivid evocation of his time, much of it drawn from an outstanding collection of Adams family letters and diaries. In particular, the more than one thousand surviving letters between John and Abigail Adams, nearly half of which have never been published, provide extraordinary access to their private lives and make it possible to know John Adams as no other major American of his founding era.

As he has with stunning effect in his previous books, McCullough tells the story from within—from the point of view of the amazing eighteenth century and of those who, caught up in events, had no sure way of knowing how things would turn out. George Washington, Benjamin Franklin, John Jay, the British spy Edward Bancroft, Madame Lafayette and Jefferson's Paris "interest" Maria Cosway, Alexander Hamilton, James Madison, the scandalmonger James Callender, Sally Hemings, John Marshall, Talleyrand, and Aaron Burr all figure in this panoramic chronicle, as does, importantly, John Quincy Adams, the adored son whom Adams would live to see become President.

Crucial to the story, as it was to history, is the relationship between Adams and Jefferson, born opposites -- one a Massachusetts farmer's son, the other a Virginia aristocrat and slaveholder, one short and stout, the other tall and spare. Adams embraced conflict; Jefferson avoided it. Adams had great humor; Jefferson, very little. But they were alike in their devotion to their country. At first they were ardent co-revolutionaries, then fellow diplomats and close friends. With the advent of the two political parties, they became archrivals, even enemies, in the intense struggle for the presidency in 1800, perhaps the most vicious election in history. Then, amazingly, they became friends again, and ultimately, incredibly, they died on the same day—their day of days—July 4, in the year 1826.

Much about John Adams's life will come as a surprise to many readers. His courageous voyage on the frigate Boston in the winter of 1778 and his later trek over the Pyrenees are exploits that few would have dared and that few readers will ever forget.

It is a life encompassing a huge arc—Adams lived longer than any president. The story ranges from the Boston Massacre to Philadelphia in 1776 to the Versailles of Louis XVI, from Spain to Amsterdam, from the Court of St. James's, where Adams was the first American to stand before King George III as a representative of the new nation, to the raw, half-finished Capital by the Potomac, where Adams was the first President to occupy the White House. This is history on a grand scale -- a book about politics and war and social issues, but also about human nature, love, religious faith, virtue, ambition, friendship and betrayal, and the far-reaching consequences of noble ideas.

Above all, John Adams is an enthralling, often surprising story of one of the most important and fascinating Americans who ever lived. (From the publisher.)

Critics have called David McCullough America's premier narrative historian, and rightly so: McCullough is both a scholar and a storyteller, a meticulous researcher and a highly engaging writer. Given his ability to turn a 750-page biography of an often-overlooked, one-term president into a national bestseller, it might even be said that McCullough is a magician. Gordon Wood, author of The Radicalism of the American Revolution and a professor of history at Brown University, has said McCullough "is without doubt the most celebrated of what you could call our 'popular historians,' and he's also respected by academic historians."
McCullough, who majored in English literature at Yale, began his career as a magazine writer, but turned to history after reading some uninspired accounts of the disastrous 1899 flood of Johnstown, Pennsylvania. He wrote his own history of the flood and its aftermath, and went on to chronicle two great feats of engineering: the building of the Brooklyn Bridge and the creation of the Panama Canal.

Both The Great Bridge and The Path Between the Seas were bestsellers, and the latter won a National Book Award. Critics praised McCullough for his vivid descriptions and lively excerpts of firsthand accounts. The Great Bridge, wrote Robert Kirsch in The Los Angeles Times, is "a book so compelling and complete as to be a literary monument, one of the best books I have read in years." McCullough then progressed from the Panama Canal to its great proponent Theodore Roosevelt, the subject of his first biography, Mornings on Horseback, about the young Teddy Roosevelt, was hailed as a "masterpiece" by Newsday 's John A. Gable and praised as "a beautifully told story, filled with fresh detail" by The New York Times Book Review.

McCullough spent the next ten years researching and writing about Harry Truman, and the resulting book was a complex, compelling and affectionate portrait of America's 33d president. Truman won the Pulitzer Prize for biography and sold well over 1 million copies. Another Pulitzer Prize was awarded to McCullough's next book, John Adams, also a bestseller.

"McCullough's appreciation for Adams, like his appreciation for Truman, depends on an adherence to certain old-fashioned moral guidelines, which is to say on strength of character," wrote New York Times reviewer Pauline Maier. McCullough is eloquent about his subjects' honesty, unpretentiousness and deep sense of civic duty, though critics have sometimes charged that he is too quick to excuse or pass over their failings. But McCullough has his own reservations about "a certain school of historians who don't just want to prove somebody from the past had feet of clay, they want to show he's nothing but clay."

McCullough can admire his subjects in spite of their faults; as he once said, "The more we see the founders as humans the more we can understand them." Through his books, millions of readers have found American heroes whose human characters are as well worth studying as their historic accomplishments.

In researching John Adams, McCullough went to every place in Europe that Adams had lived, in England, France and Holland. He also traveled with his wife along the same route Adams and Jefferson took when they toured the gardens of England. "If I had been able to sail across the Atlantic in a 24-gun frigate, as John Adams did, I would have done that, too," he said.

In addition to his work as a writer, McCullough has hosted the public television shows Smithsonian World and The American Experience, and narrated Ken Burns's documentary The Civil War. (From Barnes & Noble.)