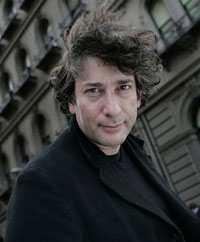 The day after they moved in, Coraline went exploring....

In Coraline's family's new flat are twenty-one windows and fourteen doors. Thirteen of the doors open and close.

The fourteenth is locked, and on the other side is only a brick wall, until the day Coraline unlocks the door to find a passage to another flat in another house just like her own.

At first, things seem marvelous in the other flat. The food is better. The toy box is filled with wind-up angels that flutter around the bedroom, books whose pictures writhe and crawl and shimmer, little dinosaur skulls that chatter their teeth. But there's another mother, and another father, and they want Coraline to stay with them and be their little girl. They want to change her and never let her go.

Bestselling author Neil Gaiman has long been one of the top writers in modern comics, and has also penned many books for readers of all ages, including AMERICAN GODS, ANANSI BOYS, CORALINE, and M IS FOR MAGIC. He is listed in the Dictionary of Literary Biography as one of the top ten living post-modern writers, and is a prolific creator of works of prose, poetry, film, journalism, comics, song lyrics, and drama. He has written multiple New York Times bestselling books, and is a Hugo, Nebula, Bram Stoker, SFX, and Locus Award winner. He has also worked in support of First Amendment rights, and was awarded the Defender of Liberty Award in August 1997 by the Comic Book Legal Defense Fund for his efforts. Born and raised in England, Neil now lives near Minneapolis, Minnesota.