Balzac and the Little Chinese Seamstress
by Dai Sijie 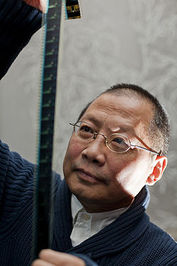 In 1971, as Mao’s Cultural Revolution swept over China, shutting down universities and banishing “reactionary intellectuals” to the countryside, two teenage boys are sent to live on the remote and unforgiving mountain known as Phoenix in the Sky. Even though the knowledge the narrator and his best friend Luo had acquired in middle school was “precisely nil,” they are nevertheless considered dangerous intellectuals and forced to spend their days carrying buckets of excrement up and down the mountain to fertilize the fields. But when they bargain their way into obtaining a forbidden Balzac novel from their friend Four Eyes, a new and dizzyingly vast world opens up to them. Through Balzac, the narrator discovers “awakening desire, passion, impulsive action, love, all the subjects that had, until then, been hidden” [p. 57]. And when Luo falls in love with the beautiful Little Seamstress, life and literature come together in a passionate romance. Luo and the narrator plot to steal Four Eyes’ suitcase full of books both for their own pleasure and to transform the seamstress from a simple peasant into a sophisticated woman. Their success in doing so, and the unexpected consequences that follow, drive the novel to its stunning, heart-wrenching conclusion.

Dai Sijie is a Chinese-born filmmaker and novelist who has lived and worked in France since 1984. His first novel, Balzac and the Little Chinese Seamstress, was an overnight sensation; it spent twenty-three weeks on the New York Times best-seller list.