Back When We Were Grownups
by Anne Tyler 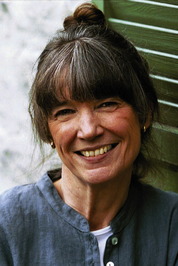 An irresistible new novel from Anne Tyler. At 53, Rebecca Davitch- mistress of The Open Arms, a crumbling 19th-century row house in Baltimore where giving parties is the family business-suddenly asks herself whether she has turned into the wrong person. Is she really this natural-born celebrator; joyous and outgiving?

Certainly that's how Joe Davitch saw her 30-some years ago. And that's why this large-spirited older man, a divorce with three little girls, swept her into his orbit. Before she knew it, she was embracing his extended family (plus a child of their own) and hosting endless parties in the ornate, high-ceilinged rooms where people paid to celebrate their family occasions in style.

But can Beck (as she is known to the Davitch clan) really recover the person she has left behind? A question that touches us all-and one that Anne Tyler explores with characteristic humor and wisdom in a novel one wishes would never end.

Anne Tyler was born in Minneapolis in 1941 but grew up in Raleigh, North Carolina. She graduated at nineteen from Duke University and went on to do graduate work in Russian studies at Columbia University. This is Anne Tyler's fifteenth novel; she has written seventeen (as of 2007). Her eleventh book, Breathing Lessons, was awarded the Pulitzer Prize in 1988. She is a member of the American Academy and Institute of Arts and Letters. She lives in Baltimore.

Anne Tyler has had a very active imagination all her life. When she was a young girl, she would spend an hour or two after being put to bed every night fantasizing that she was a doctor. She imagined conversations with patients, and pictured their lives as she did so, considering both their illnesses and the intricacies of their backgrounds. She constructed little mental plays around these characters that she would whisper to herself in the dark -- much to the chagrin of her brother, with whom she shared a room. "[H]e used to call out to our parents, 'Anne's whispering again!'" she once told Barnes & Noble.com. As much as she may have vexed her brother, she also believes that these fantasies helped her to develop into the beloved, award-winning novelist she is today.

Tyler's work is characterized by a meticulous attention to detail, a genuine love of her characters, and a quirky sense of humor. Her public persona is characterized by its own quirks, as well. She refuses to grant face-to-face interviews. She has never publicly read from any of her books. She does not do book signings or tours. All of this has lent a certain mystique to her novels, although Tyler has said that her reluctance to become a public figure status is actually the result of simple shyness, not to mention her desire for her writing to speak for itself. Fortunately, Anne Tyler's work speaks with a clear, fully-realized voice that does not require unnecessary elucidation by the writer.

Tyler published her first novel If Morning Ever Comes in 1964, and that singular voice was already in place. This astute debut that tracks the self-realization of a young man named Ben Joe Hawkins displayed Tyler's characteristic wit and gentle eccentricity right off the bat. Harper's declared the novel "a triumph," and Tyler was on her way to creating an impressive catalog of novels chronicling the every day hopes, fears, dreams, failures, and victories of small-town Americans. Having come of age, herself, in rural North Carolina, Tyler had particular insight into the lives of her characters. Each novel was a little shimmering gem, winning her a devoted following and public accolades that more than compensated for her refusal to appear in public. Her novel Earthly Possessions, the story of a housewife who is taken hostage by a young man during a bank robbery, was released the same year she won an award for "literary excellence and promise of important  work to come" from the American Academy and Institute of Arts and Letters. The book also went on to become a television movie starring Susan Sarandon and Stephen Dorff in 1999.

However, the most well-known adaptation of one of Tyler's novels arrived more than a decade earlier when The Accidental Tourist was made into an Academy Award winning film starring Geena Davis and William Hurt. Consequently, The Accidental Tourist is viewed by some as Tyler's signature novel, covering many of the writer's favorite themes: the push and pull of marriage, the appearance of a romantic eccentric, personal tragedy, and the quest to escape from the drudgery of routine. The Accidental Tourist won the National Book Critics Circle Award and hit number one on The New York Times Bestseller list.

Three years later, Tyler received the Pulitzer Prize for Breathing Lessons, which further explored themes of marriage and self-examination. Despite having won the prestigious Pulitzer, Tyler still refused to allow herself to be drawn into the spotlight. Quietly, contemplatively, she chose to continue publishing a sequence of uniformly fine novels, including Saint Maybe, Ladder of Years, and The Amateur Marriage.

A more recent novel, Digging to America (2006) reexamines many of her chief obsessions, while also possibly drawing upon a personal triumph—her marriage to Iranian psychiatrist and novelist Taghi Mohammad Modarressi—and the tragedy of his death in 1997. The novel follows the relationship between two families, the Iranian Yazdans and the all-American Donaldsons, as they become closer and closer and affect each other deeper and deeper over a succession of years. Digging to America is arguably Tyler's deepest and most profound work to date. It also delivers more of her peculiar brand of humor, which will surely please her longtime fans, thrilled that she continues spinning tales with the trademark attention to character that has distinguished her stories ever since she was a little girl, whispering to herself in the dark. Tyler may have decided to remain in the dark and out of the public eye, but the stories she has to tell have shed more than their share of light on the lives of her readers.