A Most Wanted Man
by John le Carré 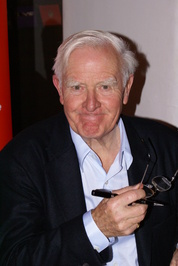 A half-starved young Russian man in a long black overcoat is smuggled into Hamburg at dead of night. He has an improbable amount of cash secreted in a purse around his neck. He says his name is Issa. Annabel, an idealistic young German civil rights lawyer, determines to save Issa from deportation. Soon her client's survival becomes more important to her than her own career -- or safety. In pursuit of Issa's mysterious past, she confronts the incongruous Tommy Brue, the sixty-year-old scion of Brue Frères, a failing British bank based in Hamburg. Annabel, Issa and Brue form an unlikely alliance -- and a triangle of impossible loves is born.

John le Carré is the nom de plume of David John Moore Cornwell, who was born in 1931 in Poole, Dorset, and was educated at Sherborne School, at the University of Berne (where he studied German literature for a year) and at Lincoln College, Oxford, where he graduated with a degree in modern languages.

He taught at Eton from 1956 to 1958 and was a member of the British Foreign Service from 1959 to 1964, serving first as Second Secretary in the British Embassy in Bonn and subsequently as Political Consul in Hamburg. He started writing novels in 1961, and since then has published twenty-one titles.