Among the Hidden
by Margaret Peterson Haddix 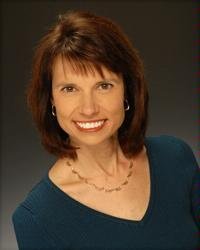 Luke is one of the shadow children, a third child forbidden by the Population Police. He's lived his entire life in hiding, and now, with a new housing development replacing the woods next to his family's, he is no longer even allowed to go outside. Then, one day Luke sees a girl's face in the window of a house where he knows two other children already live. Finally, he's met a shadow child like himself. Jen is willing to risk everything to come out of the shadows -- does Luke dare to become involved in her dangerous plan? Can he afford not to?" (From jacket copy.)

Margaret Peterson Haddix grew up on a farm near Washington Court House, Ohio. She graduated from Miami University (of Ohio) with degrees in English/journalism, English/creative writing and history. Before her first book was published, she worked as a newspaper copy editor in Fort Wayne, Indiana; a newspaper reporter in Indianapolis; and a community college instructor and freelance writer in Danville, Illinois.

She has since written more than 25 books for kids and teens, including Running Out of Time; Don’t You Dare Read This, Mrs. Dunphrey; Leaving Fishers; Just Ella; Turnabout; Takeoffs and Landings; The Girl with 500 Middle Names; Because of Anya; Escape from Memory; Say What?; The House on the Gulf; Double Identity; Dexter the Tough; Uprising; Palace of Mirrors; Claim to Fame; the Shadow Children series; and the Missing series. She also wrote Into the Gauntlet, the tenth book in the 39 Clues series. Her books have been honored with New York Times bestseller status, the International Reading Association’s Children’s Book Award; American Library Association Best Book and Quick Pick for Reluctant Young Adult Readers notations; and more than a dozen state reader’s choice awards.

Haddix and her husband, Doug, now live in Columbus, Ohio, with their two children.

How many of you are third children? How many of you have ever stayed home from school -- say you have told your mum or dad that you are sick, and, well, you do feel a  little sick, maybe -- No, don't put up your hands, I don't want you to incriminate yourselves. But if you have ever stayed home from school when you maybe should have gone to school anyway, and you look out the window and you see that everyone else in your neighborhood has gone to school or work, and there you are all alone -- it's sort of a strange feeling, isn't it? Sort of like you are getting away with something but you feel a little bit guilty and jumpy at the same time?

Luke knows the feeling. The suburbs have grown up around his farm-house and kids in his neighborhood do pretty much what kids everywhere do. They play outside, they date, go to school, learn to drive. That is, two kids from each family live like this. You see Luke lives at a time when the population police are in control and THEY say that 2 children is the limit for any one family. Third children who become known to the government have a mysterious way of disappearing. And Luke is a third child. In an attempt to keep him hidden his parents have forbidden him to walk near windows, to sit in the kitchen to eat meals with the rest of the family - pretty much to do anything at all. Luke is on the verge of going insane from lack of stimulation. So he discovers in his attic room, a vent which will allow him to spy on the world. But on one quiet morning in the suburbs, about 10 a.m., when the bikes are abandoned in driveways and it seems as though even the chipmunks and birds have gone elsewhere, he catches a movement out of the corner of his eye. Startled, he looks and catches a glimpse of a face in a window, before the curtain is hastily dropped back. It seems that Luke is not alone in the world - not the only third child in his neighborhood. And if he is not the only third child in his neighborhood, might there be many others like him in the world? But now Luke must make the biggest decision of his life - should he risk going out in the open to meet this person?

If you liked this book, try...