A Gentleman in Moscow
by Amor Towles 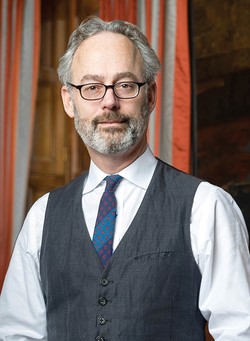 The novel follows Count Alexander Rostov after a 1922 Bolshevik tribunal orders him to spend the rest of his life inside the luxury Metropol hotel for being an unrepentant aristocrat.

Amor Towles was born and raised just outside Boston, Massachusetts. He graduated from Yale University and received an MA in English from Stanford University, where he was a Scowcroft Fellow. For his M.A. thesis, he wrote a series of five related stories that was published in the Paris Review in 1989.

Towles spent the next 20 years in the financial industry as director of research for Select Equity Group, an $18 billion hedge fund. During that time, he never gave up the dream of becoming an author. A decade into his financial career, he began work on a novel set in the Russian countryside, only to toss the manuscript after seven years. Finally, in 2006, he made another effort, this time succeeding with what would become his 2011 debut novel, Rules of Civility.

In 2013, Towles retired so he could devote himself to full-time writing. His second book, A Gentleman in Moscow, came out in 2016. According to Towles, the book was inspired by a business trip two years earlier as he mused about guests at Le Richemond hotel in Geneva, Switzerland. He had noticed the same people on a previous trip, and he began to wonder what it would be like to be trapped, for decades, inside a hotel. Towles wrote his thoughts down on Le Richemond hotel stationery, notes which he has kept to this day. (Adapted from the publisher and Wall Street Journal.)