Writer who depicts the immigrant experience through fiction. 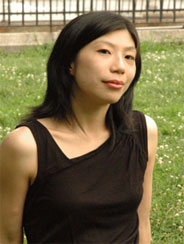 A graduate of Stanford University and New York University’s Creative Writing Program, Lee has received fellowships from the MacDowell Colony and the Corporation of Yaddo. She spent more than a decade in the publishing industry as an editor at Harper Collins Publishers and Lantern Books in Brooklyn, where she co-edited the anthology Defiant Daughters: 21 Women on Art, Activism, Animals, and the Sexual Politics of Meat. She has also worked as an English teacher in China, taught writing at the Asian American Writers’ Workshop, and served as a mentor with Girls Write Now.

Lee is the second-generation daughter of immigrants from China. She lives with her husband and son in the Astoria neighborhood of Queens, New York City.

I just finished The Trespasser by Tana French, which was satisfying in the way only a long, complicated police procedural set in the British Isles can be. I love all of her Dublin Murder Squad books, but this one in particular kept me guessing until the end.

The newspaper. My most recent novel, The Art of Confidence, was based on an article I read four years ago about paintings forged by a Chinese immigrant living in Queens. It was definitely a case of truth being stranger than fiction.

For the first time, my toddler brought me the book he wanted me to read to him before bed—Blue Hat, Green Hat by Sandra Boynton. We’re big Sandra Boynton fans.

John Oliver and Last Week Tonight. His coverage of the election almost made it bearable.

Charlotte the Spider in Charlotte’s Web. “It is not often that someone comes along who is a true friend and a good writer. Charlotte was both.”

As a second-generation Chinese American, I often write about how much can be lost in the space between generations, as well as what can be created.

I’m helping someone write a memoir about their struggle with mental illness.

"Rich and multilayered, Lee’s novel explores what it means to be a part of something, whether it’s a family or a culture. Told in Hua’s sparse, somber voice, the story grabs readers from the start and doesn’t let go until the final page. A truly memorable first outing."
—Booklist, ***Starred Review***

On Across a Green Ocean:

"An affecting exploration of the immigrant experience and the search for forgiveness, acceptance, and a sense of belonging."
—Booklist

On The Art of Confidence:

"Lee delves into what propels people to do the right or wrong thing and centers the book’s unique perspective on the creation of a forged painting. . . . As the story unfolds from different viewpoints, the author moves back and forth in time, bringing depth and understanding to what motivates people in both their personal and professional lives."
—Publishers Weekly

"VERDICT This well-written mystery ponders the effects of one's decisions in the face of moral quandaries while depicting a lesser-known slice of the New York art world." —Library Journal

"Revealed through viewpoints that shift between chapters, this is a sublime examination of what defines art, what gives art value, and the prices, far beyond the monetary, that we're willing to pay to view it, admire it, acquire it, and even let it go. Through fragile alliances, flawed relationships, and capricious loyalties, Lee's characters will lie, distort, betray, and ultimately accede to uneasy truths." —Booklist