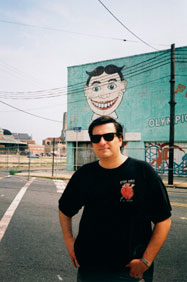 Wallace Stroby is an award-winning journalist and the author of the novels Shoot the Woman First, Kings of Midnight, Cold Shot to the Heart, Gone 'Til November, and The Barbed-Wire Kiss which was a finalist for the 2004 Barry Award for Best First Novel.

A New Jersey native, he's a lifelong resident of the Jersey Shore. For 13 years, he was an editor at The Newark Star-Ledger, Tony Soprano's hometown newspaper.

On Shoot the Woman First:

On Kings of Midnight:

"As coolly efficient and professional as its heroine, this thriller evokes Donald Westlake’s Parker novels with lean storytelling that pauses only for meticulously detailed descriptions of criminals at work or in conflict."
—Publishers Weekly

On Cold Shot to the Heart:

"Another fast, taut winner from Stroby (GONE ‘TIL NOVEMBER, 2010)  As for Crissa, she may be crime fiction's best bad girl ever."
—Kirkus Reviews, ***Starred Review***

On Gone 'Til November:

On The Heartbreak Lounge:

"In a brilliant follow-up to his impressive debut (THE BARBED-WIRE KISS, 2003), Stroby continues the hard-boiled adventures of Harry Rane… [who] walks these mean streets perfectly at home with the icons: Spade, Marlowe, and Archer."
—Kirkus Reviews

On The Barbed-Wire Kiss:

"Stroby's dazzling debut stars the Grieving Ex-Cop, adds the Old Girl Friend Now Married to a Mobster, stirs in A Little Favor to Help Out a Best Friend - and still manages to wake us up like the slap of a wave on the New Jersey shore." —Publishers Weekly, ***Starred Review***