Former prosecutors write about one of NJ's most sensational murder cases. 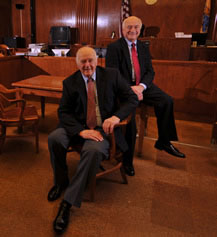 Charles Buckley, a former Bergen County Prosecutor and resident of Norwood, and Richard Muti, also a former assistant prosecutor in Bergen County and former Mayor of Ramsey, have co-authored a book about the Robert Reldan case titled "The Charmer: The True Story of Robert Reldan—Rapist, Murderer, and Millionaire—and the Women Who Fell Victim to his Allure." Their book was the subject of a front-page article ("Book delves into Bergen murderer's 'charm': Former prosecutors explore system's failings," The Record, November 30, 2011) and a docu-drama on the Investigation Discovery channel ("The Will of Lillian Booth").

In October 1975, two young, attractive women were abducted from their respective towns in the northern valley region of Bergen County. The bodies of Susan Heynes and Susan Reeve were found later that same month in secluded areas of Rockland County, NY. Each had been strangled with her own pantyhose.

Thus began one of the most sensational murder cases in New Jersey history. Robert Reldan—a career criminal whose M.O. targeted women, especially those he perceived to be alone and vulnerable—became the prime suspect in a matter of days. Police were able to arrest him on unrelated burglary charges and take him off the streets of Bergen County, but it took 15 months before he was ultimately charged with the two murders, and 14 years before he was ultimately convicted for those two murders.

There are numerous northern New Jersey towns associated with Mr. Reldan. He grew up in Fort Lee, lived in Closter from 1958 to 1975, (when not in prison) and Tenafly (where his marital residence was). Victims came from Haworth (home of one murder victim), and Demarest (home of a second murder victim). He also left victims in Teaneck, Norwood, and North Arlington.

"The Charmer is an absolutely fascinating true crime story. It is also one of the best, in-depth examinations of the criminal mind I have read in a long time; here, that of a young man with all of life's advantages who turned into a serial rapist and ruthless killer of two beautiful young women. Authors Richard Muti and Charles Buckley, two experienced former prosecutors who know what they are talking about, have expertly captured the sights, sounds and feel of a gritty homicide investigation as well as the pulsating essence of a major murder trial. I highly recommend this book. It will not disappoint."
—Vincent Bugliosi, prosecutor of Charles Manson and author of Helter Skelter, the Edgar-award winning, bestselling true crime book of all time, as well as numerous other books and articles.

"This book tells a story parents would not want to read to their children at night. In crisp prose and with the precision of former prosecutors and the curiosity of good reporters, Richard Muti and Charles Buckley recount how Robert Reldan went from a carefree, handsome young man, doted over by parents and awarded gifts by an aunt who was an IBM heiress, to first a petty burglar, then a serious thief, then a rapist, and finally a killer. This story alone is compelling. What elevates this tale is the authors' account of how these needless tragedies could have been avoided. Every phase of the criminal justice system failed—from prosecutors, to judges, to juries, to court psychiatrists, to probation officers. The book could read like sociology. It does not. It is almost Dreiser-esque." —Ken Auletta, best-selling author of eleven books, including "Googled: The End of the World As We Know It," "Media Man: Ted Turner's Improbable Empire," "Three Blind Mice: How the TV Networks Lost Their Way," and "Greed and Glory on Wall Street.: The Fall of the House of Lehman." Mr. Auletta has written the Annals of Communications columns and profiles for The New Yorker magazine since 1992.