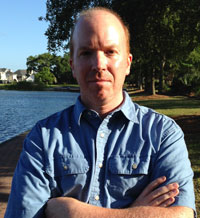 Owen was born and raised in Bergen County. He moved away and then moved back for college (Montclair and then grad school at Rutgers). His family has a summer home on a lake in Sussex County and he returns there every summer. Duffy’s fiction has appeared in various journals such as Passages North, New South, Storyglossia, New Delta Review, PANK, and Hawai’i Review. He holds an MFA in writing from Rutgers-Newark and currently teaches and mentors young writers. He lives with his family in Charleston, South Carolina.

Today I’m reading Paul Vidich’s new Cold War spy thriller, “An Honorable Man” and enjoying it. I have the latest issue of the “A Public Space” on my nightstand – literary reviews have always warded off writer’s block for me.

I go fishing. To those who understand the nearly spiritual experience of standing in water, literally in nature, and trying to understand it, no more needs to be said.

The show Louie, with comedian Louis C.K. It makes me laugh because it’s funny, but I’ve realized it’s funny because it’s true. I wish they’d keep making the show, year after year, until he’s an old man. It’s just so naturally funny I don’t want it to end.

Holden Caulfield from “The Catcher in the Rye”. If only because he came at a time when I was leaving behind childhood characters like dragons and starting to understand adult characters. I wanted to be those characters in a way. I will likely never be so impressionable again, and so he sticks in my mind as being so incredibly real.

That I had fun writing them. That may seem a rather silly distinction to make, but the act of writing fiction, at it’s very best, is like time travel. To get so lost in your imagination that you are watching people, your characters, do things you’ve always wished you could do – it’s a lot of fun.

I’m writing a novel about police brutality. It’s about a teacher whose brother was killed by a town cop as a kid, and when that same cop comes to his college years later to investigate the disappearance of a student, the teacher has to decide, as the investigation begins to go wrong, to confront both his past, and this cop.

On The Artichoke Queen:

"After the death of her mother, a young woman vows to live her life to the fullest and embarks on a career as a race car driver, defying the norms of 1950s America in Duffy’s debut novel...Prudence Baylor is a force to be reckoned with. A childhood accident took most of her ability to hear, but it also sparked her deep desire to prove herself...the story finishes strong, providing surprising insights into the lives of those closest to Prudence. A sentimental but never sappy coming-of-age tale that hits all the right notes in unexpected ways."
—Kirkus Review

"...readers will be intrigued by Duffy's believable, free-spirited protagonist." —Booklist