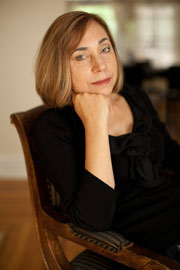 Elena Gorokhova grew up in St. Petersburg, Russia, although for most of her life it was known to her as Leningrad. At the age of twenty-four she married an American and came to the United States with only a twenty-kilogram suitcase to start a new life. She is the author of two memoirs published by Simon & Schuster, A Mountain of Crumbs and Russian Tattoo. She has a Doctorate in Language Education and currently lives and teaches in New Jersey. Her work has appeared in The New York Times, The Daily Telegraph, on BBC Radio, and in a number of literary magazines.

On A Mountain of Crumbs:

"Growing up during the cold war in Leningrad, Ellen gets in trouble for not following the rules, and her wry, present-tense narrative, both comic and anguished, is not about political intrigues but about the daily detail of her struggle at home and at school. Of course, the government parallels are always there. As her overbearing, protective mother explains, the official rules are simple: “they lie to us, we know they’re lying, they know we know . . .” Within the very specific context of the cold war Soviet Union, Gorokhova effectively dramatizes universal teen conflicts. Are duty and personal happiness always mutually exclusive? Or can it be true what Ellen’s aunt says: you can be useful and still care for the beauty of your nails. Eventually Ellen marries an American to get out, and looking back now from her home in New Jersey, her dual perspective is at the heart of the drama, ironic but never cold or simple. There is no word for privacy in Russian, but there is one for isolation."
—Hazel Rochman...Booklist

"[An] exquisitely wrought, tender memoir of growing up in the Soviet Union. . . . A Mountain of Crumbs could be taught as a master class in memoir writing. . . Gorokhova writes about her life with a novelist’s gift for threading motives around the heart of a story . . . Each chapter distills a new revelation in poetic prose . . . This moving memoir made me cry . . . Powerful." —Elena Lappin, The New York Times Book Review

"Russian Tattoo is a page-turner from the start... still writing in her engaging, fresh voice."
—Booklist