Fantasy author of the Aandor series. 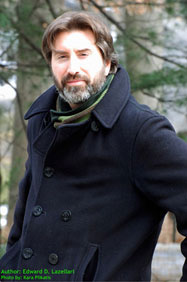 Edward Lazellari was born in New York City. He began writing professionally in the early 1990s while working as an illustrator at Marvel Comics and shortly after enrolled in Rutgers University where he earned his BA in English literature, with a concentration in creative writing.

Edward won Playboy Magazine’s prestigious college fiction contest in 1999, and his short story, “The Date” was published in the October issue that year. His first novel, Awakenings, was published by TOR books in 2011.  The second novel in the Aandor fantasy series, The Lost Prince,  was published in 2013.  He is currently working on the third book in the series, titled Blood of Ten Kings. Edward lives in Jersey City and is currently an editor for McGraw-Hill in New York City.

On The Lost Prince:

"Lazellari's sequel to Awakenings continues the search for Daniel on Earth, where the boy's supporters as well as his enemies take on false identities to make their way through a world without magic. VERDICT This blend of urban and cross-world fantasy combines the excitement of the Harry Potter series with the dark grittiness of the Dresden Files books and should appeal to mature young adults as well as to adult lovers of the genre."
—Library Journal

"Awakenings is a weird, wild adventure that heralds the arrival of a new voice in the field of science fantasy. Edward Lazellari is a talent to watch with high expectations."
—Ben Bova

"This solid debut will appeal to fantasy fans looking for familiar bones under a modern skin." —Publishers Weekly

"Despite their differences in lifestyle and ethics, both policeman Cal MacDonnell and photographer Seth Raincrest experience the same long-term amnesia and are unable to remember what happened before the last 13 years. When their lives intersect with that of young Daniel Hauer and the mysterious Leilani, both men begin to fill in the blanks in their past-a past that leads them to the world of Aandor and their mission to protect a boy who would be king. Lazellari's first novel combines crossover fantasy in the style of Charles de Lint and Mercedes Lackey with urban fantasy reminiscent of Jim Butcher in a hard-knocks action tale. VERDICT This series opener promises to satisfy the interests of fans of action-based fantasy in which romance plays a minor but significant role." —Library Journal