Journalist whose writing is changing the national conversation. 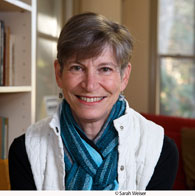 Dale Russakoff is a veteran reporter who spent 28 years at the Washington Post covering presidential campaigns, education, the economy, and other breaking topics. Her profiles include Washington Post Magazine cover stories on Bill Bradley and Condoleeza Rice and a New Yorker profile of NYC's welfare commissioner Nicholas Scoppetta. The Prize: Who’s in Charge of America’s Schools?, her first book, was serialized in the New Yorker. Russakoff, a longtime volunteer tutor in the Newark, NJ, schools, lives in Montclair, NJ, with her family.

I'm actually rereading an amazing book, There are no Children Here, by Alex Kotlowitz. It's even more stunning and affecting than it was when I first read it over 20 years ago, largely because of my immersion in Newark and the world of children struggling to learn in the face of poverty. It's about two young brothers living in a violent and horribly decrepit housing project in Chicago and it's as intimate a portrait as you can find of what it takes for kids to survive in that environment. As painful and sad as it is, it's also a story full of beauty. The next book on my nightstand is The Children Act by Ian McEwan.

I am inspired by a small wooded reservation near my house in Montclair. It's called Mills Reservation and I walk there every day with our dog. I feel lucky to have this natural preserve in our dense, NYC metropolitan world. It's so quiet you notice the sounds of your footfalls, even as you catch glimpses of the Manhattan skyline. I love noticing the way the light plays off the trees differently in each season. When I'm writing and I need a break, I feel instant energy and relaxation just from walking one of its paths.

I have been a volunteer coordinator for 20 years for a program that houses homeless families in churches and synagogues in Essex County. Our synagogue hosted three families over the Christmas week, and I was surprised by the equanimity, poise and at times the sparkle of the children. I shouldn't say "surprised," because I feel this way almost every time we host families. Witnessing the resilience of children to the harshest life challenges is a truly spiritual experience.

I write at my kitchen table. I have a small office on the third floor of our house but I gravitated toward the center of the house, where there's lot more light. It's very quiet all day now that we are empty nesters. After sitting here for more than four years as I researched and wrote my book, I swore that once I finished, I'd never want to see this table again and would invest in a new one. But it's still here and I find myself still very comfortable with it.

My husband makes me laugh. He has the most impromptu sense of humor imaginable. When you least expect it, he finds something comic hiding in plain sight. It seems to be a genetic trait. His father, at 92, still has his laugh-out-loud wit. And both of my sons have the gift, which delights me.

Quentin Compson of The Sound and the Fury and Absalom, Absalom. I first read Faulkner in college, as a child of Birmingham, Alabama, when I found myself far from my known world, at Harvard University. I completely identified with Quentin's struggle in "the cold, dark New England night" to make peace with the South and its past, rooted in the evil of slavery. I had a number of Southern friends, and we all became captivated by Quentin, particularly when we learned that there was a tiny plaque on a bridge over the Charles River in Cambridge, memorializing his life and death. The existence of the plaque was a mystery. No one knew who put it there, or why. One of my proudest journalistic accomplishments was when, as a sophomore writing for The Harvard Crimson, I solved the mystery -- with my mother's help. As it turned out, the plaque was placed there by the minister of the Unitarian Church in my home town of Birmingham! He was a friend of my mother's, and she happened to tell him about this plaque and my fascination with it. As he listened, his jaw dropped. "Irene," he said, "I put that plaque there." He was a midwesterner, and he had been a student at Harvard Divinity School in the 1960s. He became close friends with a Japanese engineering student and they discovered Faulkner and Quentin together. As outsiders to New England, both of them identified with Quentin's feelings of loneliness and alienation. They created the plaque and placed it on the bridge as a physical representation of his importance to them. Quentin is so much more than a Southerner. He's youth clinging to lost ideals in a changing world. He's anyone who feels the earth moving beneath his feet.

I'd like readers to know that I grew up in Birmingham, Alabama as a white child during the civil rights movement and the final years of legal segregation. Martin Luther King Jr. called Birmingham "the most thoroughly segregated city" in America. I vividly remember, as a young child, attending segregated schools, drinking from segregated water fountains and trying on clothes in segregated fitting rooms at department stores. My parents, unlike most white people at the time, viewed all this as profoundly wrong and encouraged me to ask questions about it. Partly as a result, I have been interested in race and inequality all my life. This is a key reason I was drawn to Newark and its struggles from the first time I reported a story there in 1994, as a reporter in the New York City bureau of The Washington Post.

On The Prize: Who's in Charge of America's Schools:

"Russakoff portrays the powerbrokers arrayed to make radical changes, the local principals and teachers on both sides of the charter-school debate, and the parents and students caught in the crossfire. This is an engrossing look at the school reform movement and the hard lessons learned in Newark."
—Booklist, ***Starred Review***

"Russakoff's eagle-eyed view of the current state of the public education system in Newark and the United States is one of the finest education surveys in recent memory." —Publishers Weekly