Author of several novels, including the runaway bestseller Orphan Train. 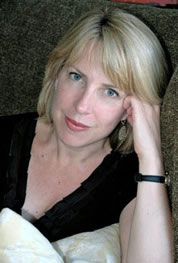 Born in Cambridge, England, and raised there as well as in the American South and Maine, Kline lives with husband and three sons in Montclair, New Jersey. She is at work on another novel and an anthology.

"Kline's latest novel (after Bird in Hand) weaves contemporary and historical fiction into a compelling story about loss, adaptability, and courage… VERDICT With compassion and delicacy Kline presents a little-known chapter of American history and draws comparisons with the modern-day foster care system."
—Library Journal

"Kline's absorbing new novel (after Bird in the Hand) is a heartfelt page-turner about two women finding a sense of home… Kline lets us live the characters' experiences vividly through their skin, and even the use of present tense, which could distract, feels suited to this tale. The growth from instinct to conscious understanding to partnership between the two is the foundation for a moving tale." —Publishers Weekly

"A long journey from home and the struggle to find it again form the heart of the intertwined stories that make up this moving novel… Kline illuminates a largely hidden chapter of American history, while portraying the coming-of-age of two resilient young women." —Booklist