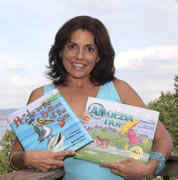 Illustrator of almost a dozen children's books, Betsy Franco Feeney is co-author of two picture books based on songs by award-winning singer/songwriter Christine Lavin. Amoeba Hop received a BEST BOOKS award from the American Association for the Advancement of Science.

Recently, their second collaboration, Hole in the Bottom of the Sea, garnered a very favorable Kirkus review which begins with: "If the fate of the planet is in children's hands, reading them books like this one might be a wise idea." In two separate Kirkus reviews, Betsy's art has been described as "meticulously detailed with rare humor and imagination" and "thoughtfully detailed illustrations...tug at young reader's heartstrings".

On Hole in the Bottom of the Sea:

"Franco Feeney’s thoughtfully detailed illustrations of oil-slicked sea critters will tug at young readers’ heartstrings, and an educational appendix at the end offers in-depth discussion of renewable energy forms, a DIY craft project, sheet music and a checklist of how to save energy at home. The only thing missing, in fact, is an environmental cleanup team and a life-sized windmill. Ambitious? No doubt. Especially considering that a portion of the book’s net proceeds benefits the National Wildlife Rehabilitators Association (NWRA). Kudos to Lavin and Franco Feeney for making this songbook an entertaining—and earth-friendly—investment."
—Kirkus Reviews