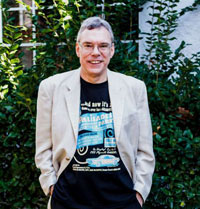 Alan is a New Jersey original, he was born in Englewood and lived in Cliffside Park, Edgewater, Palisades Park, and Haledon.  (And he was a BooksNJ2013 keynote speaker.)

He has lived on the west coast since 1973 when he left for college at Cal State Long Branch and did graduate work at the UCLA Film School.

Alan has been nominated three times for an Emmy and won an Emmy Award for his work as a writer-producer on the television series LA Law. He also won the People’s Choice Award for LA Law.  He’s received all sorts of accolades for his writing.

"Brennert writes his valentine to the New Jersey playground of his youth in Ragtime style, mixing fact and fiction. It's a memorable trip."
—People Magazine

"This nostalgic coming-of-age tale of a little girl with big dreams is the perfect read." —Library Journal