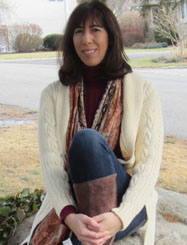 A.J. Colucci is the critically acclaimed author of The Colony and Seeders, stories which combine true, cutting-edge science with the adrenaline-rush of a thriller. Seeders was described by Douglas Preston as “gripping and brilliantly original.” Her debut novel The Colony received a starred review in Publishers Weekly, and Booklist called it “a frightening combination of well-researched science and scenes of pure horror.”

Colucci explains: "I like to write about nature because it can be a brutal place—kill or be killed. But it's also filled with a sort of beauty and logic that makes you wonder which species are truly evolved. Humans have a tendency to separate themselves from everything non-human. We consider ourselves above nature, not part of it. I think it's important to recognize what we have in common and gain a better understanding of all living creatures that share this planet."

Colucci spent 15 years as a newspaper reporter, magazine editor and writer for corporate America. Today she is a full-time author who lives in New Jersey with her husband and two daughters.

Colucci is a member of International Thriller Writers and Mystery Writers of America.

"Colucci's suspense-novel debut is a frightening combination of well-researched science and scenes of pure horror. Downright gory in places, the tale is rounded out by the usual corrupt officials, warring industries, and failed romances. Full of suspense and intrigue, The Colony will especially appeal to fans of Michael Crichton's Jurassic Park and the like."
—Booklist

"Mutant ants--millions of 'em--have taken over New York City, killing tens of thousands of humans, and only one thing can stop them: a special formula synthesized from a queen's pheromones that makes the ants turn on each other... Not a book for picnic-goers, this tale may have you rethinking those warnings about fire ants heading north." —Kirkus Reviews

"Colucci, who made an invasion of killer ants feel frighteningly plausible in her debut, The Colony (2012), again features a credulity-straining premise—plants that can communicate with and control the actions of human beings—but, where The Colony is a serious sf thriller, this one is more of a gothic horror-comedy…this is a fun book. The premise is developed enough to make it feel believable, at least for the sake of argument, and the setup is interesting, with a small cast of varied characters stranded on an inhospitable island off the coast of Nova Scotia, where strange goings-on cause them to question their sanity. This is a major change of pace from the author’s first novel, but readers who take it on its own terms should have a good time."
—Booklist

"Move over King, Koontz, and Crichton, there’s a new gunslinger in town named A.J. Colucci. Eerie, atmospheric, and strangely plausible, Colucci’s Seeders is a creepy revelation–a riveting techno-thriller that reads like a Victorian ghost story. Seeders is a perfect chiller for the age of global warming. Highly recommended!" —Jay Bonansinga, New York Times bestselling co-author of The Walking Dead: The Fall of the Governor