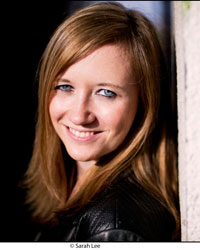 Laura Barnett is a writer, journalist, and theater critic. She has been on the staff at the Guardian and the Daily Telegraph, and is now a freelance arts journalist and features writer working for the Guardian, the Observer, and Time Out London, as well as several other national newspapers and magazines. The Versions of Us is her first novel.

I’ve just started The Shipping News by Annie Proulx. It’s the first of Proulx’s novels I’ve read, and I’m really enjoying savouring a style that is so utterly and completely her own.

On my nightstand is Finding Home by Emily Dugan, a study of ten real-life stories of migration to Britain, which feels particularly pertinent in the current political climate; and The End of the Affair by Graham Greene, which happens to be set in the area of south London where I was born.

The Isle of Mull in the Scottish Hebrides. I spend a week there every spring with family to remember my late grandmother, who also loved the island. It’s the most beautiful place - sea eagles, Atlantic surf, the great wide grey sky - and it resets me somehow: I seem to always come up with new ideas when I’m there. But inspiration can strike any time, and often in the most unexpected places.

The result of the UK referendum on our membership of the European Union was a massive surprise to me, but certainly not in a good way! Happily, the day after the result came through I was able to lift myself from the slough of despair by going camping with my husband Andy for his birthday. It was the first camping trip I’d gone on since school, and I was very surprised by how much I enjoyed it. Inspired by our American relatives, we even made s’mores!

In a small attic room at home in south London. I recently painted all the walls grey, including the ceiling, so it’s like a little restful cave. The window looks out over quince and pear trees, and our cat Eno is usually asleep in an armchair in the corner. In fact, he’s curled up there right now.

The possibility that anyone could seriously believe that the United Kingdom would be better off severing the ties that have helped preserve peace and co-operation in Europe for the last sixty years. But that’s not looking so funny any more.

Ooh, that’s a tricky one. Probably Lizzie Bennet from Pride and Prejudice: I love how headstrong and independent she is in an era when these were not generally prized qualities in a woman.

I’d love to have the opportunity to say that what really excites me about fiction is realism: the chance to capture life as it is actually lived, in all its beauty and banality, and pin it to the page. That’s the ultimate goal for me, anyway! So with The Versions of Us, we have a love story - in fact, three love stories - but the love in question is not an idealised, romanticised quality, but real love, the love we all experience, with all its excitement and difficulties.

And as for me personally - well, all I’ve wanted to do since I was five years old is write novels, so I am just so thrilled that I am now having the opportunity to do so professionally, and really delighted to offer any advice at all to anyone who is hoping to do the same.

I’m deep into edits on my new novel, Greatest Hits, which will be published in the UK next spring - and hopefully in the US and beyond not too long after that. The novel is about a female singer-songwriter, now in her sixties, reflecting on her life and career. It’s structured around the sixteen songs she chooses, over one day, for a very personal greatest hits album. I’m actually working with an amazing British singer-songwriter, Kathryn Williams, to write and produce the songs. As far as I know, this is the first time such a collaboration has ever happened, bringing original fiction and music together to make a whole album, so it’s incredibly exciting.

I’m also writing a short story to be broadcast on BBC Radio 4 in the autumn, and working hard on getting The Versions of Us produced for television. It’s been optioned by the brilliant British company Trademark Films, who have made films like Shakespeare in Love and My Week with Marilyn. I do hope we’ll have more news on that soon.

On The Versions of Us:

"VERDICT Reading this ambitious first novel is like putting together the pieces of a complex puzzle. The challenge pays off - only when the puzzle is complete can readers see the whole panoramic picture." —Library Journal