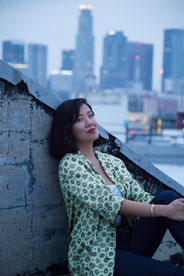 Jade Chang has covered arts and culture as a journalist and editor.  Her first paying job after college was as a researcher for the J. Peterman catalog.  She is the recipient of a Sundance Fellowship for Arts Journalism, the AIGA/Winterhouse Award for Design Criticism, and the James D. Houston Memorial scholarship from the Squaw Valley Community of Writers.  Jade lives in Los Angeles.

Lately I’ve been reading a lot of books by people who I’m doing events with, which is really fun because you get to have some sense of the author as a person, too! I just finished reading Little Nothing by Marisa Silver and Behold the Dreamers by Imbolo Mbue, both brilliant in their own ways. On deck: Deceit and other Possibilities by Vanessa Hua and Waiting for Lipchitz at Chateau Marmont by Aris Janigian.

In general, I have too many ideas so I rarely set out looking for inspiration of that sort. But inspiration to sit down and work on those ideas can be very helpful! When I see anyone working really hard at something, whether it’s a little kid learning how to ride a bike, or a café that you can just tell is especially well-managed by someone who really cares about it, or a musician talking about the hours of practice that they put in, or even a really beautifully put-together grocery store display—really anything that shows dedication and skill and artistry—that inspires me to get to work, too.  Also, I walk a lot. Los Angeles is full of wild canyons where you can climb a hill and work out a narrative issue in your mind.

The Army Corps of Engineers’ halting of the Dakota Access Pipeline Project! As I write this, news is literally just emerging. Of course this doesn’t kill the project entirely and we don’t know what might happen in the future, but it is at least an optimistic action and proof that there is power in protest.

It’s hard for me to write fiction at home. The last year and a half that I was working on The Wangs vs. the World (which took five years to write!) I spent almost every evening at a coffeeshop or bar in Los Angeles—the buzz of noise and activity somehow helps me zero in and concentrate.

That is a hard question to answer! Pretty much anything that doesn’t make me cry makes me laugh.

And this is an impossible question to answer! I don’t think I can name an absolute favorite, but lately I’ve been thinking a lot about A Tree Grows in Brooklyn, one of my childhood favorites. So I thought my answer was going to be Francie Nolan, the young girl who is the protagonist of the book, but I think that it’s actually her mother, Katie—or maybe it’s their relationship that I love most. It takes them a long time to realize that they might agree on the most important things in life. Also, my two favorite moments in the book involve Francie appreciating something that her mother has done: the first is when she gets her children’s minds off the lack of food in the house by pretending that they’re all polar explorers and the second is at a meal for Francie’s graduation, when she makes her daughter proud and relieved by tipping the waiter with a sort of carefree flourish, even though she’s never had a restaurant meal before.

I’m working on another novel, but it’s a little too early to discuss!

"In Chang's sparkling debut novel, a family whose fortune has been lost in the 2008 financial crisis takes a cross-country road trip in an effort to regroup...Chang's charming and quirky characters and comic observations make the novel a jaunty joy ride to remember." —Publishers Weekly

"Chang throws the immigrant journey on its head in this offbeat debut." —Booklist

"[The Wangs] is unrelentingly fun, but it's also raw and profane—a story of fierce pride, fierce anger, and even fiercer love." —NPR.org